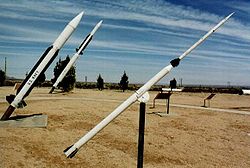 Loki, officially designated 76mm HEAA Rocket T220, was an American
United States
The United States of America is a federal constitutional republic comprising fifty states and a federal district...
unguided anti-aircraft rocket based on the German Taifun
Taifun (rocket)
Taifun was a German World War II anti-aircraft unguided rocket system. Waves of Taifuns were to be launched en masse into US B-17 Flying Fortress formations hoping for a direct hit...
. Like the Taifun, Loki never saw service in its original role, but later found widespread use as a sounding rocket
Sounding rocket
A sounding rocket, sometimes called a research rocket, is an instrument-carrying rocket designed to take measurements and perform scientific experiments during its sub-orbital flight. The origin of the term comes from nautical vocabulary, where to sound is to throw a weighted line from a ship into...
. It was so successful in this role that several advanced versions were developed on the basic Loki layout, including the final Super Loki.

Taifun was powered by a hypergolic mixture pressure-fed into the combustion chamber
Combustion chamber
A combustion chamber is the part of an engine in which fuel is burned.-Internal combustion engine:The hot gases produced by the combustion occupy a far greater volume than the original fuel, thus creating an increase in pressure within the limited volume of the chamber...
. The pressure was provided by small cordite
Cordite
Cordite is a family of smokeless propellants developed and produced in the United Kingdom from 1889 to replace gunpowder as a military propellant. Like gunpowder, cordite is classified as a low explosive because of its slow burning rates and consequently low brisance...
charges that were fired into the fuel tanks, in the process bursting a pair of thin diaphragms to allow the fuel and oxidizer to flow into the combustion chamber. The Germans were never able to get the engine to work reliably, and the rocket was never deployed operationally.

American efforts to further develop the system started at Bendix
Bendix
- People :* Bendix Hallenstein - New Zealand businessman* Henry Bendix - fictional character from Wildstorm comics* John E. Bendix - American Civil War and New York Guard general* Max Bendix - American composer, conductor, violinist* Reinhard Bendix - sociologist...
in 1948, after the US Army had initially studied the Taifun in 1946. One major change was to replace the warhead area with a dart-like version, which was separated from the main rocket body at engine burnout to continue on without the drag of the airframe and thereby reach higher altitudes. Like the Germans before them, Bendix had significant problems with the engine, and eventually decided to develop a solid-fuel engine based on a new elastomeric fuel from the Jet Propulsion Laboratory
Jet Propulsion Laboratory
Jet Propulsion Laboratory is a federally funded research and development center and NASA field center located in the San Gabriel Valley area of Los Angeles County, California, United States. The facility is headquartered in the city of Pasadena on the border of La Cañada Flintridge and Pasadena...
(JPL), starting in March 1951. The new engine was successful, and the liquid engine was abandoned in February 1952.

The first flight of a solid-fuel Loki occurred in June 1951.

An initial meeting on Jun 25 1954 at the Redstone Arsenal
Redstone Arsenal
Redstone Arsenal is a United States Army base and a census-designated place adjacent to Huntsville in Madison County, Alabama, United States and is part of the Huntsville-Decatur Combined Statistical Area...
of Dr. Wernher von Braun, Frederick C. Durant III, Alexander Satin, David Young, Dr. Fred L. Whipple, Dr. S. Fred Singer, and Commander George W. Hoover resulted in an agreement that a Redstone rocket
Redstone (rocket)
The PGM-11 Redstone was the first large American ballistic missile. A short-range surface-to-surface rocket, it was in active service with the U.S. Army in West Germany from June 1958 to June 1964 as part of NATO's Cold War defense of Western Europe...
with a Loki cluster as the second stage could launch a satellite into a 200-mile orbit without major new developments.

JPL eventually fired 3,544 at White Sands
White Sands Missile Range
White Sands Missile Range is a rocket range of almost in parts of five counties in southern New Mexico. The largest military installation in the United States, WSMR includes the and the WSMR Otera Mesa bombing range...
during the testing program, where it was discovered that the launch of one rocket would affect the flight path of the ones behind it, making the dispersion too large to be a useful weapon. Although this problem was studied in depth, it appeared there was no obvious solution. The Army eventually gave up on Loki in September 1955, in favour of the Nike-Ajax missile, which had recently reached operational status.

In 1955 the US Navy
United States Navy
The United States Navy is the naval warfare service branch of the United States Armed Forces and one of the seven uniformed services of the United States. The U.S. Navy is the largest in the world; its battle fleet tonnage is greater than that of the next 13 largest navies combined. The U.S...
took many of the already-completed Lokis and replaced the explosive warhead with a chaff dispenser. These WASP rockets were fired from ships directly upward, and the chaff released at apogee where it was tracked by radar
Radar
Radar is an object-detection system which uses radio waves to determine the range, altitude, direction, or speed of objects. It can be used to detect aircraft, ships, spacecraft, guided missiles, motor vehicles, weather formations, and terrain. The radar dish or antenna transmits pulses of radio...
in order to accurately measure the winds aloft. The USAF
United States Air Force
The United States Air Force is the aerial warfare service branch of the United States Armed Forces and one of the American uniformed services. Initially part of the United States Army, the USAF was formed as a separate branch of the military on September 18, 1947 under the National Security Act of...
also used the Loki for this role, assigning it the name XRM-82. The ONR
Office of Naval Research
The Office of Naval Research , headquartered in Arlington, Virginia , is the office within the United States Department of the Navy that coordinates, executes, and promotes the science and technology programs of the U.S...
also used the Loki in some of its Rockoon
Rockoon
A rockoon is a solid fuel sounding rocket that, rather than being immediately lit while on the ground, is first carried into the upper atmosphere by a gas-filled balloon, then separated from the balloon and automatically ignited...
launches, lofting the Loki to high altitudes on a helium balloon before firing.

Many other Lokis were sold into the civilian market, where they became quite popular for meteorological work, referred to as the Loki-Dart. To better serve the needs in this role, a larger-diameter motor with 50% more fuel was developed in 1957, creating the Loki II, the original retroactively becoming Loki I. Other companies developed additional versions, including the Cooper Development /Marquardt Rocksonde 100 with a 100,000 ft maximum altitude and Rocksonde 200 able to reach 200,000 ft.

In 1963 Space Data Corporation (SDC) formed to provide small sounding rockets to the various defence agencies. They used the meteorological rockets and created an instrument payload for the Loki in place of the chaff dispenser. The instruments consisted primarily of a thermistor
Thermistor
A thermistor is a type of resistor whose resistance varies significantly with temperature, more so than in standard resistors. The word is a portmanteau of thermal and resistor...
to collect temperature, which was broadcast via a small radio. Altitude was tracked from the ground, by reflecting radar off the probe's "starute", a square mylar parachute and radar reflector. The SDC version was slightly heavier than the original Loki in order to improve stability during "cruise", which lowered maximum altitude by about 10,000 ft. Production of the Loki Datasonde started in 1966, and more than 20,000 were built until production ended in 1985.

The Air Force requested a version that would not require radar tracking, and SDC responded by placing a transponder
Transponder
In telecommunication, the term transponder has the following meanings:...
in the payload. This increased payload weight, and required the starute to be enlarged, further increasing launch weight. To reach the required altitudes, SDC developed a much larger booster, which also increased overall weight and further improved stability. The resulting Super Loki first flew in 1968, and since then 9,000 have been delivered.

The Air Force Meteorologists and NASA's Observational Scientists desired higher apogees with the ROBINSphere payloads in the early 1970s. In 1972, Space Data completed the development of the 4+1/2 in Viper IIIA solid propellant rocket motor. This motor followed the design of the Super Loki nearly identically and provided apogees of ~120 km for the ROBINSphere. This higher apogee allowed for measuring the wind and atmospheric vertical profiles through the 110–95 km region that were unobtainable from the Super Loki boosted ROBINSphere.

The Super Loki has the following specifications: