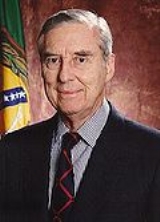 Overview
Lloyd Millard Bentsen, Jr. (February 11, 1921 – May 23, 2006) was a four-term United States senator
United States Senate
The United States Senate is the upper house of the bicameral legislature of the United States, and together with the United States House of Representatives comprises the United States Congress. The composition and powers of the Senate are established in Article One of the U.S. Constitution. Each...
(1971 until 1993) from Texas and the Democratic Party
Democratic Party (United States)
The Democratic Party is one of two major contemporary political parties in the United States, along with the Republican Party. The party's socially liberal and progressive platform is largely considered center-left in the U.S. political spectrum. The party has the lengthiest record of continuous...
nominee for Vice President in 1988 on the Michael Dukakis
Michael Dukakis
Michael Stanley Dukakis served as the 65th and 67th Governor of Massachusetts from 1975–1979 and from 1983–1991, and was the Democratic presidential nominee in 1988. He was born to Greek immigrants in Brookline, Massachusetts, also the birthplace of John F. Kennedy, and was the longest serving...
ticket. He also served in the House of Representatives
United States House of Representatives
The United States House of Representatives is one of the two Houses of the United States Congress, the bicameral legislature which also includes the Senate.The composition and powers of the House are established in Article One of the Constitution...
from 1949 to 1955. In his later political life, he was Chairman of the Senate Finance Committee and the U.S. Treasury Secretary
United States Secretary of the Treasury
The Secretary of the Treasury of the United States is the head of the United States Department of the Treasury, which is concerned with financial and monetary matters, and, until 2003, also with some issues of national security and defense. This position in the Federal Government of the United...
during the first two years of the Clinton administration.
Bentsen was born in Mission
Mission, Texas
Mission is a city in Hidalgo County, Texas, United States. The population was 77,058 at the 2010 census Mission is part of the McAllen–Edinburg–Mission and Reynosa–McAllen metropolitan areas.-Geography:Mission is located at ....
in Hidalgo County
Hidalgo County, Texas
Hidalgo County is a county located in the U.S. state of Texas. Located in the Rio Grande Valley of South Texas, Hidalgo County is one of the fastest-growing counties in the United States, and is the seventh most-populous county in Texas. Its population in 2010 was 774,769, a 35% increase from 2000...
in south Texas; his parents were Lloyd Millard Bentsen, Sr., a first-generation Danish American, and the former Edna Ruth Colbath.
x