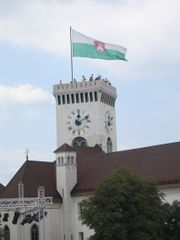 Ljubljana Castle is a medieval castle in Ljubljana
Ljubljana
Ljubljana is the capital of Slovenia and its largest city. It is the centre of the City Municipality of Ljubljana. It is located in the centre of the country in the Ljubljana Basin, and is a mid-sized city of some 270,000 inhabitants...
, Slovenia
Slovenia
Slovenia , officially the Republic of Slovenia , is a country in Central and Southeastern Europe touching the Alps and bordering the Mediterranean. Slovenia borders Italy to the west, Croatia to the south and east, Hungary to the northeast, and Austria to the north, and also has a small portion of...
. It is located on the Castle Hill overlooking the old town.

According to archeological surveys, the area of the present castle has been settled continuously since 1200 BC, when the first settlements and later fortifications were built.

The oldest mention of the Ljubljana Castle is inscribed on a parchment sheet Nomina defunctorum (names of the dead), which is kept by the Udine Cathedral
Udine Cathedral
Udine Cathedral is a Roman Catholic cathedral located in Udine, Italy. It is the seat of the Archbishop of Udine.The cathedral's construction began in 1236, on a Latin cross-shaped plan with three aisles and side-chapels...
Archive. It dates from 1112 till 1125. It mentions the nobleman Rudolf of Tarcento, a laywer of the Patriarchate of Aquileia, who had bestowed a canon with 20 farmsteads beside the castle of Ljubljana (castrum Leibach) to the Patriarchate. In 1144, the Ljubljana Castle was mentioned as a property and the seat of the Carinthian
Duchy of Carinthia
The Duchy of Carinthia was a duchy located in southern Austria and parts of northern Slovenia. It was separated from the Duchy of Bavaria in 976, then the first newly created Imperial State beside the original German stem duchies....
dukes of the House of Spanheim. In 1335, it became property of the House of Habsburg. In 15th century, it was almost completely demolished and rebuilt with a complete wall and towers at the entrance, where a drawbridge
Drawbridge
A drawbridge is a type of movable bridge typically associated with the entrance of a castle surrounded by a moat. The term is often used to describe all different types of movable bridges, like bascule bridges and lift bridges.-Castle drawbridges:...
was placed. A chapel was also built at that time. In the 16th and 17th centuries, other objects were gradually built.

Because it was not a home of a ruler or another important noble person and because a fortification in the area was no longer required, the castle started to lose its importance. The maintenance costs were too high so the castle began to crumble. In the 19th century, the castle was redesigned partially as a prison and partially as a military stronghold, making it less popular among the citizens. Several famous people were jailed in the castle, including the Italian revolutionary hero Silvio Pellico
Silvio Pellico
Silvio Pellico was an Italian writer, poet, dramatist and patriot.-Biography:Silvio Pellico was born at Saluzzo . He spent the earlier portion of his life at Pinerolo and Turin, under the tuition of a priest named Manavella. At the age of ten he composed a tragedy inspired by a translation of the...
, the Hungarian Prime Minister Lajos Batthyany
Lajos Batthyány
Count Lajos Batthyány de Németújvár was the first Prime Minister of Hungary. He was born in Pressburg on 10 February 1807, and was executed by firing squad in Pest on 6 October 1849, the same day as the 13 Martyrs of Arad.-Career:His father was Count József Sándor Batthyány , his mother Borbála...
and the Slovene author Ivan Cankar
Ivan Cankar
Ivan Cankar was a Slovene writer, playwright, essayist, poet and political activist. Together with Oton Župančič, Dragotin Kette, and Josip Murn, he is considered as the beginner of modernism in Slovene literature...
.

In 1905, the castle was bought by the Ljubljana Municipality, on the explicit wish of the mayor Ivan Hribar
Ivan Hribar
Ivan Hribar was a Slovene and Yugoslav banker, politician, diplomat and journalist. At the turn of the century, he was one of the leaders of the National Progressive Party, and one of the most important figures of Slovene liberal nationalism...
, who planned to establish a City Museum in it. The plan was however not carried out. Instead, the city decided to settle poor families into it. The residents stayed there until the mid-1960s, when preparations for renovation of the castle began.

At the end of the 1960s, the long and extensive renovation works started. The whole renovation took more than 35 years. In the 1990s, the use of the castle as a place for weddings and cultural events began.

The Ljubljana Castle funicular, a funicular railway
Funicular
A funicular, also known as an inclined plane or cliff railway, is a cable railway in which a cable attached to a pair of tram-like vehicles on rails moves them up and down a steep slope; the ascending and descending vehicles counterbalance each other.-Operation:The basic principle of funicular...
to the top of Castle Hill, was built in 2006 and brought to service in 2007.

The remains of the fortifications on Castle Hill were redesigned into a promenade, called Šance. The author of the design was the Slovenian architect Jože Plečnik
Jože Plecnik
Jože Plečnik , was a Slovene architect who practised in Vienna, Belgrade, Prague and Ljubljana.-Biography:...
.