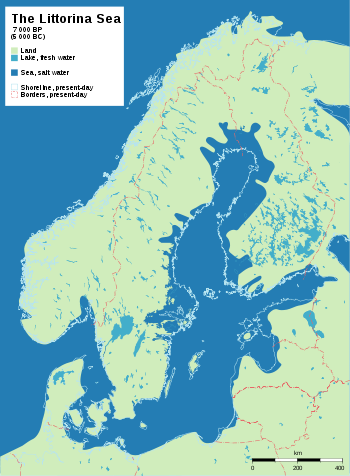 Littorina Sea is a geological brackish-water stage of the Baltic Sea
Baltic Sea
The Baltic Sea is a brackish mediterranean sea located in Northern Europe, from 53°N to 66°N latitude and from 20°E to 26°E longitude. It is bounded by the Scandinavian Peninsula, the mainland of Europe, and the Danish islands. It drains into the Kattegat by way of the Øresund, the Great Belt and...
, which existed around 7500–4000 BP
Before Present
Before Present years is a time scale used in archaeology, geology, and other scientific disciplines to specify when events in the past occurred. Because the "present" time changes, standard practice is to use AD 1950 as the origin of the age scale, reflecting the fact that radiocarbon...
and followed the Mastogloia Sea
Mastogloia Sea
The Mastogloia Sea is one of the prehistoric stages of the Baltic Sea in its development after the last ice age. This took place ca. 8000 years ago following the Ancylus Lake stage and preceding the Littorina Sea stage....
, transitional stage of the Ancylus Lake
Ancylus Lake
Ancylus lake is a name given by geologists to the body of fresh water that replaced the Yoldia Sea after the latter had been severed from its saline intake across central Sweden by the isostatic rise of south Scandinavian landforms. The dates are approximately 9500-8000 BP calibrated, during the...
. The Littorina Sea is named after common periwinkle
Common Periwinkle
The common periwinkle or winkle, scientific name Littorina littorea, is a species of small edible sea snail, a marine gastropod mollusk which has gills and an operculum, and is classified within the family Littorinidae, the periwinkles....
(Littorina littorea), then a prevailing mollusc in the Baltic waters, which indicates salinity of the sea.

The Littorina Sea was a period of transgression and maximum salinity during the warmer Atlantic period of European climatology. At the optimum, approximately 4500 BP, the sea contained twice the volume of water and covered 26.5% more surface area than it does today. At the end of the period modern landforms appeared, including the lagoons, spits and dunes currently visible.