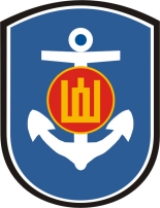 Encyclopedia
The Lithuanian Navy is the naval
Navy
A navy is the branch of a nation's armed forces principally designated for naval and amphibious warfare; namely, lake- or ocean-borne combat operations and related functions...
arm of the Lithuanian Armed Forces
Military of Lithuania
The Lithuanian Armed Forces consist of ~14,500 active personnel . Conscription was ended in September 2008.Lithuania's defence system is based on the concept of "total and unconditional defence" mandated by Lithuania's national Security Strategy...
. Though formally established on 1 August 1935 its roots stretch back as far as naval engagements on the Baltic Sea in the Medieval period. Lithuanian naval units saw some service with Soviet naval forces
Soviet Navy
The Soviet Navy was the naval arm of the Soviet Armed Forces. Often referred to as the Red Fleet, the Soviet Navy would have played an instrumental role in a Warsaw Pact war with NATO, where it would have attempted to prevent naval convoys from bringing reinforcements across the Atlantic Ocean...
during World War II, and the navy has been re-established in its own right and continues to expand since Lithuania's independence
Act of the Re-Establishment of the State of Lithuania
The Act of the Re-Establishment of the State of Lithuania or Act of March 11 was an independence declaration by the Lithuanian Soviet Socialist Republic adopted on March 11, 1990...
in 1990.

Although the origin of the Lithuanian Navy dates back to the period between World War I and II, the history of the involvement in naval battles existed earlier. The Baltic tribe
Balts
The Balts or Baltic peoples , defined as speakers of one of the Baltic languages, a branch of the Indo-European language family, are descended from a group of Indo-European tribes who settled the area between the Jutland peninsula in the west and Moscow, Oka and Volga rivers basins in the east...
of Aistians that settled down in the Baltic Sea
Baltic Sea
The Baltic Sea is a brackish mediterranean sea located in Northern Europe, from 53°N to 66°N latitude and from 20°E to 26°E longitude. It is bounded by the Scandinavian Peninsula, the mainland of Europe, and the Danish islands. It drains into the Kattegat by way of the Øresund, the Great Belt and...
shore built ships and used them for trade as well as for military purposes. Furthermore, according to annals, in the 13th century other Baltic tribes, the Coronians and Samogitians, tried to destroy the castle of Riga
Riga
Riga is the capital and largest city of Latvia. With 702,891 inhabitants Riga is the largest city of the Baltic states, one of the largest cities in Northern Europe and home to more than one third of Latvia's population. The city is an important seaport and a major industrial, commercial,...
coming by ships. It is also known about the Lithuanians’ victory in the ship battle in Nemunas River at the time when Duke Vytenis
Vytenis
Vytenis was the Grand Duke of Lithuania from c. 1295 to c. 1316. He became the first of the Gediminid dynasty to rule for a considerable amount of time. In the early 14th century his reputation outshone that of Gediminas, who is regarded by modern historians as one of the greatest Lithuanian rulers...
ruled the Duchy of Lithuania
Duchy of Lithuania
Duchy of Lithuania was a state-territorial formation of ethnic Lithuanians, that existed from the 12th century until 1413. Most of the time it was a constituent part and a nucleus of the Grand Duchy of Lithuania...
. The most known and important naval victory was achieved by great hetman Jan Karol Chodkiewicz
Jan Karol Chodkiewicz
Jan Karol Chodkiewicz was a famous Lithuanian military commander and one of the most prominent noblemen of the Polish-Lithuanian Commonwealth.-Biography:...
on 24 March 1609 near Salismünde (now Salacgryva in Latvia) where he defeated Swedish fleet burning two enemy ships and losing none and hence breaking the blockade of Riga city. But generally the loss of territories near the Baltic Sea had a negative impact on Lithuanian's maritime development.

After World War I, the Government of Lithuania attempted to establish a maritime defense force. However, due to various political and economical reasons, the maritime defense force was only partially implemented.
In 1923, Lithuania regained the control of Klaipėda
Klaipeda
Klaipėda is a city in Lithuania situated at the mouth of the Nemunas River where it flows into the Baltic Sea. It is the third largest city in Lithuania and the capital of Klaipėda County....
harbor and gradual development of the maritime defense force started. The purchase of a minesweeper
Minesweeper (ship)
A minesweeper is a small naval warship designed to counter the threat posed by naval mines. Minesweepers generally detect then neutralize mines in advance of other naval operations.-History:...
in 1927 was one of the first significant steps to implement Lithuanian Government aims. The ship was commissioned as the training ship Prezidentas Smetona
Lithuanian warship Prezidentas Smetona
Lithuanian warship Prezidentas Smetona was the only warship in Lithuanian Navy during the years of the First Republic of Lithuania from 1918 to 1940. It was named after the first President of Lithuania, Antanas Smetona....
(President Smetona). Captain Antanas Kaskelis was assigned as ship's commanding officer. Several small boats carried out patrol duties in Klaipėda harbor. Naval officers were educated abroad.
On 1 August 1935, the commander in chief of the Lithuanian Armed Forces
Military of Lithuania
The Lithuanian Armed Forces consist of ~14,500 active personnel . Conscription was ended in September 2008.Lithuania's defence system is based on the concept of "total and unconditional defence" mandated by Lithuania's national Security Strategy...
, General Stasys Rastikis
Stasys Raštikis
Stasys Raštikis was a Lithuanian military officer, ultimately obtaining the rank of General of the Lithuanian Army, as well as the Minister of Defense in the Provisional Government established before the German takeover of Lithuania in 1941.-Biography:Born in Kuršėnai, Raštikis attended school in...
, officially established the Lithuanian Navy as a branch of the Lithuanian Armed Forces.


The impact of World War II

Before the beginning of World War II on 22 March 1939 the region of Klaipėda was occupied by Germany
Nazi Germany
Nazi Germany , also known as the Third Reich , but officially called German Reich from 1933 to 1943 and Greater German Reich from 26 June 1943 onward, is the name commonly used to refer to the state of Germany from 1933 to 1945, when it was a totalitarian dictatorship ruled by...
. Once the war started Lithuanian naval ships were forced to leave Klaipėda for Liepāja
Liepaja
Liepāja ; ), is a republican city in western Latvia, located on the Baltic Sea directly at 21°E. It is the largest city in the Kurzeme Region of Latvia, the third largest city in Latvia after Riga and Daugavpils and an important ice-free port...
harbor in Latvia
Latvia
Latvia , officially the Republic of Latvia , is a country in the Baltic region of Northern Europe. It is bordered to the north by Estonia , to the south by Lithuania , to the east by the Russian Federation , to the southeast by Belarus and shares maritime borders to the west with Sweden...
.
During the Soviet occupation, the Lithuanian Navy was attached to the Soviet Union's Baltic maritime defense force. The Prezidentas Smetona was renamed Korall and participated in the sea battles against the German Navy
Kriegsmarine
The Kriegsmarine was the name of the German Navy during the Nazi regime . It superseded the Kaiserliche Marine of World War I and the post-war Reichsmarine. The Kriegsmarine was one of three official branches of the Wehrmacht, the unified armed forces of Nazi Germany.The Kriegsmarine grew rapidly...
. On 11 January 1945, the ship triggered a mine
Naval mine
A naval mine is a self-contained explosive device placed in water to destroy surface ships or submarines. Unlike depth charges, mines are deposited and left to wait until they are triggered by the approach of, or contact with, an enemy vessel...
and sank in the Gulf of Finland
Gulf of Finland
The Gulf of Finland is the easternmost arm of the Baltic Sea. It extends between Finland and Estonia all the way to Saint Petersburg in Russia, where the river Neva drains into it. Other major cities around the gulf include Helsinki and Tallinn...
.


Development after the declaration of independence

In the fall of 1992, the Lithuanian Navy procured two Grisha class corvette
Grisha class corvette
The Albatros class was a series of large anti-submarine corvettes built by the Soviet Union between 1970 and 1990. These ships had a limited range and were used only in coastal waters. They were equipped with a variety of ASW weapons and an SA-N-4 surface-to-air missile launcher...
s, Zemaitis (F11) and Aukstaitis (F12). After the crew training period in June 1992 both frigates participated in the international exercise US Baltops 93. This was the beginning of the international cooperation of the Lithuanian Navy with other navies.

Main tasks of the Lithuanian Naval Force are:

Hunt class mine countermeasures vessels :
Both of the minesweepers are at A and P Falmouth for refit. Due to sail in the new year.