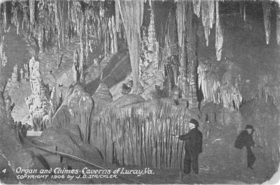 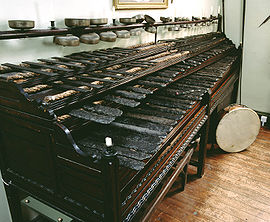 A more sophisticated lithophone trims and mounts individual stones to achieve a full-scale idiophone
Idiophone
An idiophone is any musical instrument which creates sound primarily by way of the instrument's vibrating, without the use of strings or membranes. It is the first of the four main divisions in the original Hornbostel-Sachs scheme of musical instrument classification...
:


The German composer Carl Orff
Carl Orff
Carl Orff was a 20th-century German composer, best known for his cantata Carmina Burana . In addition to his career as a composer, Orff developed an influential method of music education for children.-Early life:...
calls for a lithophone called Steinspiel in his later works. Some lithophones include electric pickups to amplify the sounds.