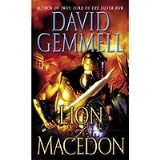 Encyclopedia
Lion of Macedon is a historic fantasy novel written by English author David Gemmell
David Gemmell
David Andrew Gemmell was a bestselling British author of heroic fantasy. A former journalist and newspaper editor, Gemmell had his first work of fiction published in 1984. He went on to write over thirty novels. Best known for his debut, Legend, Gemmell's works display violence, yet also explore...
. It is the first of two books following the character Parmenion. The book was first published in 1990. The sequel, Dark Prince, was published in 1991. Parmenion is a Spartan in training but faces prejudice and violence due to his parents being both Macedonian and Spartan. The story is based loosely on historic events, but adds fictional elements such as sorcery and demons that become even more significant in the book's sequel Dark Prince.

As the story opens, Tamis, a sorceress, is seeing the future. She discovers that only a mixed-blood Spartan called Parmenion
Parmenion
Parmenion was a Macedonian general in the service of Philip II of Macedon and Alexander the Great, murdered on a suspected false charge of treason....
can help her. Parmenion is a half-blood Spartan whose mother is from Macedon
Macedon
Macedonia or Macedon was an ancient kingdom, centered in the northeastern part of the Greek peninsula, bordered by Epirus to the west, Paeonia to the north, the region of Thrace to the east and Thessaly to the south....
. He is an accomplished runner and a strategic genius, yet he is despised by the young Spartan nobles. He is forced to kill a love rival in duel, subsequently forcing him to flee to Thebes.

There, Parmenion starts a new life as a professional runner, but also gets involved with Thebian rebels attempting to overthrow the Spartan garrison now residing in the city center. This ultimately leads to an extended war between to the two city states, ending with Parmenion crushing the Spartan army, destroying the Spartan legend in the process.

Some years later Parmenion is a famous mercenary general, winning battles all around Asia. He is then offered a chance to rebuild the Macedonian army by Philip II of Macedon.