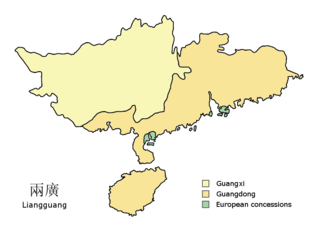 The names of the two entities form a pair, as they literally mean "Guang-East" and "Guang-West". "Guang" itself means "expanse" or "vast", and has been associated with the region since the creation of Guang Prefecture (Guangzhou
Guangzhou
Guangzhou , known historically as Canton or Kwangchow, is the capital and largest city of the Guangdong province in the People's Republic of China. Located in southern China on the Pearl River, about north-northwest of Hong Kong, Guangzhou is a key national transportation hub and trading port...
) in AD 226
226
Year 226 was a common year starting on Sunday of the Julian calendar. At the time, it was known as the Year of the Consulship of Severus and Marcellus...
. During the Qing Dynasty
Qing Dynasty
The Qing Dynasty was the last dynasty of China, ruling from 1644 to 1912 with a brief, abortive restoration in 1917. It was preceded by the Ming Dynasty and followed by the Republic of China....
, the office of the Governor-General of Liangguang existed from 1735 to 1911 to oversee both provinces.

In 1988, the island of Hainan
Hainan
Hainan is the smallest province of the People's Republic of China . Although the province comprises some two hundred islands scattered among three archipelagos off the southern coast, of its land mass is Hainan Island , from which the province takes its name...
was separated from Guangdong province and established as a separate province.
The source of this article is wikipedia, the free encyclopedia.  The text of this article is licensed under the GFDL.