Encyclopedia
Laurium is a village in Calumet Township
Calumet Township, Michigan
Calumet Township is a charter township of Houghton County in the U.S. state of Michigan. The population was 6,997 at the 2000 census.-History:Native Americans mined copper in Calumet Township thousands of years ago....
, Houghton County
Houghton County, Michigan
-National protected areas:* Keweenaw National Historical Park * Ottawa National Forest -Demographics:As of the census of 2000, there were 36,016 people, 13,793 households, and 8,137 families residing in the county. The population density was 36 people per square mile . There were 17,748 housing...
in the U.S. state
U.S. state
A U.S. state is any one of the 50 federated states of the United States of America that share sovereignty with the federal government. Because of this shared sovereignty, an American is a citizen both of the federal entity and of his or her state of domicile. Four states use the official title of...
of Michigan
Michigan
Michigan is a U.S. state located in the Great Lakes Region of the United States of America. The name Michigan is the French form of the Ojibwa word mishigamaa, meaning "large water" or "large lake"....
, in the center of the Keweenaw Peninsula
Keweenaw Peninsula
The Keweenaw Peninsula is the northern-most part of Michigan's Upper Peninsula. It projects into Lake Superior and was the site of the first copper boom in the United States. As of the 2000 census, its population was roughly 43,200...
. The population was 2,126 at the 2000 census. 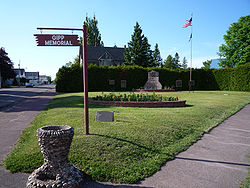 Until 1895 Laurium was known as "Calumet" (not to be confused with the present nearby town of Calumet
Calumet, Michigan
Calumet is a village in Calumet Township, Houghton County, in the U.S. state of Michigan's Upper Peninsula, that was once at the center of the mining industry of the Upper Peninsula. Also known as Red Jacket, the village includes the Calumet Downtown Historic District, listed on the National...
, Michigan
Michigan
Michigan is a U.S. state located in the Great Lakes Region of the United States of America. The name Michigan is the French form of the Ojibwa word mishigamaa, meaning "large water" or "large lake"....
, which was known as "Red Jacket" until it adopted the name Calumet in 1929). In 1895 the legislature changed Calumet's name to Laurium
Laurium
Laurium or Lavrio is a town in southeastern part of Attica, Greece. It is the seat of the municipality of Lavreotiki...
, after the famous mining town in ancient Greece
Greece
Greece , officially the Hellenic Republic , and historically Hellas or the Republic of Greece in English, is a country in southeastern Europe....
. Laurium is located in the center of the Copper Country
Copper Country
The Copper Country is an area in the Upper Peninsula of Michigan in the United States, including all of Keweenaw County, Michigan and most of Houghton, Baraga and Ontonagon counties. The area is so named as copper mining was prevalent there from 1845 until the late 1960s, with one mine ...
, the first major copper mining region in the United States. It was originally founded as a company town
Company town
A company town is a town or city in which much or all real estate, buildings , utilities, hospitals, small businesses such as grocery stores and gas stations, and other necessities or luxuries of life within its borders are owned by a single company...
serving the Laurium copper mine, which later became part of the Calumet & Hecla
Calumet and Hecla Mining Company
The Calumet and Hecla Mining Company was a major copper-mining company based in the Michigan Copper Country. In the 19th century, the company paid out more than $72 million in shareholder dividends, more than any other mining company in the United States during that period.-History:In 1864, Edwin J...
mine. The town was generally home to the wealthier members of Keweenaw society, such as mine owners and captains. Although the mines have long since closed down, the town still sports many large houses and mansions built by the wealthy mine owners. Today, many of the houses are participating locations in the Keweenaw National Historical Park.

Noted 20th Century football
American football
American football is a sport played between two teams of eleven with the objective of scoring points by advancing the ball into the opposing team's end zone. Known in the United States simply as football, it may also be referred to informally as gridiron football. The ball can be advanced by...
player George Gipp
George Gipp
George "The Gipper" Gipp was a college football player who played for the University of Notre Dame. Gipp was selected as Notre Dame's first All-American and is Notre Dame's second consensus All-American , after Gus Dorais. Gipp played multiple positions, most notably halfback, quarterback, and...
("the Gipper") was born in Laurium. A small memorial for the football legend is located on the corner of Lake Linden Avenue and Tamarack Street and his grave is in nearby Lake View Cemetery.

The Palestra was a noted hockey arena, built in Laurium in 1904. It is thought to have been the first purpose-built indoor hockey venue in the United States
United States
The United States of America is a federal constitutional republic comprising fifty states and a federal district...
. In 1921, the entire arena was moved to Marquette
Marquette, Michigan
Marquette is a city in the U.S. state of Michigan and the county seat of Marquette County. The population was 21,355 at the 2010 census, making it the most populated city of the Upper Peninsula. Marquette is a major port on Lake Superior, primarily for shipping iron ore and is the home of Northern...
, Michigan
Michigan
Michigan is a U.S. state located in the Great Lakes Region of the United States of America. The name Michigan is the French form of the Ojibwa word mishigamaa, meaning "large water" or "large lake"....
and remained there until it was torn down in 1974.

The vast majority of the structures in Laurium were constructed during the 35 years between 1880 and 1915, and the common architectural styles in the village reflect what was popular at the time.

As of the census
Census
A census is the procedure of systematically acquiring and recording information about the members of a given population. It is a regularly occurring and official count of a particular population. The term is used mostly in connection with national population and housing censuses; other common...
of 2000, there were 2,126 people, 897 households, and 540 families residing in the village. The population density
Population density
Population density is a measurement of population per unit area or unit volume. It is frequently applied to living organisms, and particularly to humans...
was 3,163.7 per square mile (1,225.2/km²). There were 1,082 housing units at an average density of 1,610.1 per square mile (623.5/km²). The racial makeup of the village was 98.12% White, 0.24% African American, 0.61% Native American, 0.19% Asian, 0.05% Pacific Islander, 0.19% from other races
Race (United States Census)
Race and ethnicity in the United States Census, as defined by the Federal Office of Management and Budget and the United States Census Bureau, are self-identification data items in which residents choose the race or races with which they most closely identify, and indicate whether or not they are...
, and 0.61% from two or more races. Hispanic or Latino of any race were 0.52% of the population. 38.9% were of Finnish, 9.6% German
Germans
The Germans are a Germanic ethnic group native to Central Europe. The English term Germans has referred to the German-speaking population of the Holy Roman Empire since the Late Middle Ages....
, 9.1% Italian
Italian people
The Italian people are an ethnic group that share a common Italian culture, ancestry and speak the Italian language as a mother tongue. Within Italy, Italians are defined by citizenship, regardless of ancestry or country of residence , and are distinguished from people...
, 7.5% French
French people
The French are a nation that share a common French culture and speak the French language as a mother tongue. Historically, the French population are descended from peoples of Celtic, Latin and Germanic origin, and are today a mixture of several ethnic groups...
and 7.2% English
English people
The English are a nation and ethnic group native to England, who speak English. The English identity is of early mediaeval origin, when they were known in Old English as the Anglecynn. England is now a country of the United Kingdom, and the majority of English people in England are British Citizens...
ancestry according to Census 2000.

There were 897 households out of which 28.2% had children under the age of 18 living with them, 46.7% were married couples
Marriage
Marriage is a social union or legal contract between people that creates kinship. It is an institution in which interpersonal relationships, usually intimate and sexual, are acknowledged in a variety of ways, depending on the culture or subculture in which it is found...
living together, 10.1% had a female householder with no husband present, and 39.7% were non-families. 37.0% of all households were made up of individuals and 19.5% had someone living alone who was 65 years of age or older. The average household size was 2.36 and the average family size was 3.14.

The median income for a household in the village was $30,404, and the median income for a family was $40,556. Males had a median income of $28,571 versus $23,824 for females. The per capita income
Per capita income
Per capita income or income per person is a measure of mean income within an economic aggregate, such as a country or city. It is calculated by taking a measure of all sources of income in the aggregate and dividing it by the total population...
for the village was $16,686. About 8.8% of families and 12.4% of the population were below the poverty line, including 12.6% of those under age 18 and 14.5% of those age 65 or over.

The Calumet-Laurium-Keweenaw (C-L-K) School District, established in 1867, remains one of the most populous school districts in the area. It serves the two towns named, as well as almost all of Keweenaw County
Keweenaw County, Michigan
-Demographics:As of the census of 2000, there were 2,301 people, 998 households, and 604 families residing in the county. The population density was 4 people per square mile . There were 2,327 housing units at an average density of 4 per square mile...
.