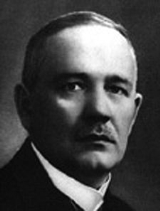 Relander was born in Kurkijoki, in Karelia
Finnish Karelia
Karelia is a historical province of Finland. It refers to the Western Karelia that during the second millennium has been under western dominance, religiously and politically. Western, i.e. Finnish Karelia is separate from Eastern, i.e...
, the son of Evald Kristian Relander, an agronomist
Agronomist
An agronomist is a scientist who specializes in agronomy, which is the science of utilizing plants for food, fuel, feed, and fiber. An agronomist is an expert in agricultural and allied sciences, with the exception veterinary sciences.Agronomists deal with interactions between plants, soils, and...
, and Gertrud Maria Olsoni. He was christened Lars Kristian, but he Finnicized his first name to Lauri during his time at school. Relander followed in his father's footsteps by enrolling at the University of Helsinki
University of Helsinki
The University of Helsinki is a university located in Helsinki, Finland since 1829, but was founded in the city of Turku in 1640 as The Royal Academy of Turku, at that time part of the Swedish Empire. It is the oldest and largest university in Finland with the widest range of disciplines available...
in 1901 to study agronomy.
He gained his first Bachelor's Degree
Bachelor's degree
A bachelor's degree is usually an academic degree awarded for an undergraduate course or major that generally lasts for three or four years, but can range anywhere from two to six years depending on the region of the world...
in Philosophy
Philosophy
Philosophy is the study of general and fundamental problems, such as those connected with existence, knowledge, values, reason, mind, and language. Philosophy is distinguished from other ways of addressing such problems by its critical, generally systematic approach and its reliance on rational...
in 1905, and his second – in Agronomy – the following year. That year also saw his marriage to Signe Maria Österman (1886–1962). They had two children, Maja-Lisa (1907–1990) and Ragnar (1910–1970).

After independence, his political career went well. He was a prominent member of his party, and served on a number of parliamentary committees. Relander was elected as Speaker of the Eduskunta for its 1919 session and part of its 1920 session. Later that year he was appointed Governor of the Province of Viipuri. However, in the 1920s he did not have enough support in his own party to become a minister.

In 1925, Relander was nominated as his party's candidate for that year's presidential election – his nomination only being confirmed just days before election day. Relander was only 41 at the time, and his nomination came as a surprise. It was further guaranteed by the fact that some of the party's key figures, such as Santeri Alkio
Santeri Alkio
Santeri Alkio was a Finnish politician, author and journalist. He is also considered to be the ideological father of Finnish Centre Party.-History:...
and Kyösti Kallio
Kyösti Kallio
Kyösti Kallio was the fourth President of Finland . He was a prominent leader of the Agrarian League, and served as Prime Minister four times and Speaker of the Parliament six times.-Early life:...
, declined to stand.
Relander was elected in the third ballot of the electoral college
Electoral college
An electoral college is a set of electors who are selected to elect a candidate to a particular office. Often these represent different organizations or entities, with each organization or entity represented by a particular number of electors or with votes weighted in a particular way...
, defeating the National Progressive Party candidate Risto Ryti
Risto Ryti
Risto Heikki Ryti was the fifth President of Finland, from 1940 to 1944. Ryti started his career as a politician in the field of economics and as a political background figure during the interwar period. He made a wide range of international contacts in the world of banking and within the...
by 172 votes to 109. He was elected largely due to the fact that he attracted less opposition than Risto Ryti. According to some contemporaries, at least the Swedish People's Party electors more eagerly voted for Relander, because his wife happened to be a Finland Swede. This story may be partly apocryphal, because also Ryti had a Finland-Swedish wife. On the other hand, Ryti had campaigned as a "Finnish peasant's son." Strong right-wing opposition to the outgoing Progressive (liberal) President Ståhlberg, Ryti's membership in the same party, and at least some career politicians' desire for a more approachable and less independent President may partly explain Relander's victory. Two other important factors should be mentioned: Relander was an active member of the "Suojeluskunta" (Civil Guard) voluntary military organization and he accepted the right-wing worldview typical of White veterans of the Civil War clearly more wholeheartedly than Ryti did. Also as people, Relander and Ryti were notably different: despite having a doctorate, Relander was a much more talkative and social person than the intellectual and thoughtful Ryti.

As President, Relander was politically inexperienced and young. Politicians and other opinion leaders could not take him seriously. Relander had no political base to speak of, and he was deemed to have no particular program for his presidency, which further decreased his support. Even Relander's continual state visits and trips drew criticism, leading to him gaining the nickname of Reissu-Lasse ('Travelling Larry'). He was continually compared to Kaarlo Juho Ståhlberg
Kaarlo Juho Ståhlberg
Kaarlo Juho Ståhlberg was a Finnish jurist and academic, who played a central role in the drafting of the Constitution of Finland in 1919. He was the first President of Finland and a nationalist liberal.-Early life:...
and his performance as president.
The cabinets during his term tended to be weak, short-lived minority cabinets, like in most European democracies of that time. All in all, Relander is remembered as a weak leader. On the other hand, Relander was an idealist who deplored the toughness of political game and preferred minority governments of supposedly excellent individuals over majority governments of unprincipled individuals
While Relander can not be considered a strong President, he did a few notable things during his single term: he allowed the Social Democrats to form a minority government (1926–27), appointed Finland's first female Cabinet minister, Miina Sillanpää (as Assistant Minister of Social Welfare), dissolved Parliament twice (in 1929 over a dispute on the civil servants' salaries, and in 1930 to have
the Parliament outlaw the Communist Party, which required a constitutional amendment and thus a two-thirds majority), and generally
speaking supported the far-right Lapua Movement, until it started to kidnap various political opponents. He maintained a rather close friendship with the Social Democratic leader, Väinö Tanner.

In the late autumn of 1930, Relander realized he would not be re-elected, and during the winter of 1930–31 he sabotaged the prospects of his former Agrarian League colleague and rival Kyösti Kallio
Kyösti Kallio
Kyösti Kallio was the fourth President of Finland . He was a prominent leader of the Agrarian League, and served as Prime Minister four times and Speaker of the Parliament six times.-Early life:...
, so that Pehr Evind Svinhufvud
Pehr Evind Svinhufvud
Pehr Evind Svinhufvud af Qvalstad , December 15, 1861 – February 29, 1944) was the third President of Finland from 1931 to 1937. Serving as a lawyer, judge, and politician in the Russian Grand Duchy of Finland, he played a major role in the movement for Finnish independence...
, Relander's former Prime Minister, was elected. In Relander's opinion, Kallio did not talk straight to him and schemed behind his back to weaken his Presidency and help his political opponents. In Kallio's opinion, Relander was a rather inexperienced politician who had high ideals but not enough common sense to implement them.
After his term as President, he served from 1931 to 1942 as the General Manager of Suomen maalaisten paloapuyhdistys, a fire insurance company for rural people. Relander died in 1942 of heart failure.