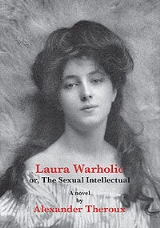 Encyclopedia
Laura Warholic; or, The Sexual Intellectual is a 2007 novel by Alexander Theroux
Alexander Theroux
Alexander Theroux is an American novelist, poet, and essayist.He was born in Medford, Massachusetts. His brother is Paul Theroux. He studied at Harvard University and Yale University...
. The plot concerns the relationship between Eugene Eyestones, the writer of an advice column called "The Sexual Intellectual", and his editor's ex-wife, Laura Warholic, whom Eyestones pities more than likes. This basic story provides the jumping off point for Theroux's satire
Satire
Satire is primarily a literary genre or form, although in practice it can also be found in the graphic and performing arts. In satire, vices, follies, abuses, and shortcomings are held up to ridicule, ideally with the intent of shaming individuals, and society itself, into improvement...
of American culture.

The book was published by Fantagraphics Books, a comics publisher who had published Theroux's monographs on Edward Gorey
Edward Gorey
Edward St. John Gorey was an American writer and artist noted for his macabre illustrated books.-Early life:...
and Al Capp
Al Capp
Alfred Gerald Caplin , better known as Al Capp, was an American cartoonist and humorist best known for the satirical comic strip Li'l Abner. He also wrote the comic strips Abbie an' Slats and Long Sam...
. Notably, it is the first all-prose novel released by the publisher. Theroux stated they were the only ones "willing to publish the full manuscript without carping or cozy abridgements."

The cover design by the author shows an unreferenced photo of Evelyn Nesbit
Evelyn Nesbit
Evelyn Nesbit was an American artists' model and chorus girl, noted for her entanglement in the murder of her ex-lover, architect Stanford White, by her first husband, Harry Kendall Thaw.-Early life:...
taken by Rudolf Eickemayer in 1901, a choice criticized to be "misleading at best" as the title character has no resemblance to her beauty, and the subtitle refers to a magazine column.

The Sexual Intellectual, a column that discusses anything related to sex, is written by Eugene Eyestones, an erudite recluse and spectacled Vietnam veteran, as a contributor to Quink, a monthly magazine published in Boston by (Minot) Warholic prone to pepper his verbal outbursts with Yiddishisms. Quink has a eclectic group of coworkers and collaborators, an unlikely “universe” of colorful and diverse people full of disagreement and prejudice, that include characters named Discknickers, the “pseudo-fascist” accountant, Ratnaster, the atheist interviewer, Duxbak, Eyestones' only friend, Mutrix, the homophobe lawyer, Chasuble, the homphile movie critic, Harriet Trombone, an outspoken Caribbean islander, and the lesbian pair of Ann Marie Tubb and The Krauthammer.

Laura Warholic, the estranged former wife of the publisher, had moved from San Francisco to Boston and is being befriended by Eyestones. Younger than he, she is “long and sexless as a rolled umbrella” with the “small white face of a vireo”, lacks charm, interests, drive, and ambition, is unable and unwilling to work, and interested only in rock and rock musicians. He does not find her attractive but feels sorry for her; pity appears his main attractive force, yet he also exploits her for his writings. Eyestones has secret longings for Rapunzel Wisht, a beautiful young woman working at the local bakery.

After writing a misogynistic and controversial essay - even Warholic finds it "harsh on the chicks" - , opining that women who create "abrogate their own psychobiology", Eyestones takes a break from writing and invites Laura on a Summer vacation drive across the country. During their tour their incompatibility becomes more apparent. Back in Boston, they start to drift apart, and Laura becomes obsessed with the Craven Slucks, a local rock band, throwing herself at its lead singer Jeff. Eyestones, after the Christmas Party of the office, joins his coworkers for a trip to the strip bar. Crayola de Blu, the seductive main attraction, is none other than his adored Rapunzel; he is angry, feels cheated, lost and deprived. In his crisis he determines that all this was his own shortcoming and that he had exploited Laura. Confessing his failures to Duxbak, Eyestones realizes that he has to ask for forgiveness. He tries to see Laura to amend, but due to a misidentification gets shot and killed. Laura, lonely and desolate, hangs herself.