Encyclopedia
Late termination of pregnancy (TOP) or late-term abortions are abortion
Abortion
Abortion is defined as the termination of pregnancy by the removal or expulsion from the uterus of a fetus or embryo prior to viability. An abortion can occur spontaneously, in which case it is usually called a miscarriage, or it can be purposely induced...
s which are performed during a later stage of pregnancy
Pregnancy
Pregnancy refers to the fertilization and development of one or more offspring, known as a fetus or embryo, in a woman's uterus. In a pregnancy, there can be multiple gestations, as in the case of twins or triplets...
. Late-term abortions are more controversial than abortion in general because the fetus
Fetus
A fetus is a developing mammal or other viviparous vertebrate after the embryonic stage and before birth.In humans, the fetal stage of prenatal development starts at the beginning of the 11th week in gestational age, which is the 9th week after fertilization.-Etymology and spelling variations:The...
is more developed and sometimes viable.

A late-term abortion often refers to an induced abortion procedure that occurs after the 20th week
Gestational age
Gestational age relates to the age of an embryo or fetus . There is some ambiguity in how it is defined:*In embryology, gestational age is the time elapsed since conception. This interval is also termed fertilisation age....
of gestation
Gestation
Gestation is the carrying of an embryo or fetus inside a female viviparous animal. Mammals during pregnancy can have one or more gestations at the same time ....
. However, the exact point when a pregnancy becomes late-term is not clearly defined. Some sources define an abortion after 16 weeks as "late". Three articles published in 1998 in the same issue of the Journal of the American Medical Association
Journal of the American Medical Association
The Journal of the American Medical Association is a weekly, peer-reviewed, medical journal, published by the American Medical Association. Beginning in July 2011, the editor in chief will be Howard C. Bauchner, vice chairman of pediatrics at Boston University’s School of Medicine, replacing ...
could not agree on the definition. Two of the JAMA articles chose the 20th week of gestation to be the point where an abortion procedure would be considered late-term. The third JAMA article chose the third trimester, or 27th week of gestation.

The point at which an abortion becomes late-term is often related to the "viability" (ability to survive outside the uterus
Uterus
The uterus or womb is a major female hormone-responsive reproductive sex organ of most mammals including humans. One end, the cervix, opens into the vagina, while the other is connected to one or both fallopian tubes, depending on the species...
) of the fetus
Fetus
A fetus is a developing mammal or other viviparous vertebrate after the embryonic stage and before birth.In humans, the fetal stage of prenatal development starts at the beginning of the 11th week in gestational age, which is the 9th week after fertilization.-Etymology and spelling variations:The...
. Sometimes late-term abortions are referred to as post-viability abortions. However, viability varies greatly among pregnancies. Nearly all pregnancies are viable after the 27th week, and no pregnancies are viable before the 21st week. Everything in between is a "grey area". 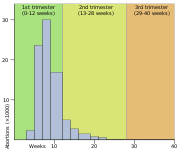 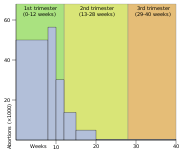 In 1987, the Alan Guttmacher Institute collected questionnaires from 1,900 women in the United States who came to clinics to have abortions. Of the 1,900 questioned, 420 had been pregnant for 16 or more weeks. These 420 women were asked to choose among a list of reasons they had not obtained the abortions earlier in their pregnancies. The results were as follows:

As of 1998, among the 152 most populous countries, 54 either banned abortion entirely or permitted it only to save the life of the pregnant woman. In addition, another 44 of the 152 most populous countries generally banned late-term abortions after a particular gestational age
Gestational age
Gestational age relates to the age of an embryo or fetus . There is some ambiguity in how it is defined:*In embryology, gestational age is the time elapsed since conception. This interval is also termed fertilisation age....
: 12 weeks (Albania, Armenia, Azerbaijan, Belarus, Bosnia-Herzegovina, Bulgaria, Croatia, Cuba, Czech Republic, Denmark, Estonia, France, Georgia, Greece, Kazakhstan, Kyrgyz Rep., Latvia, Lithuania, Macedonia, Moldova, Mongolia, Norway, Russian Federation, Slovakia, Slovenia, South Africa, Ukraine, Tajikistan, Tunisia, Turkey, Turkmenistan, Uzbekistan, and Yugoslavia), 13 weeks (Italy), 14 weeks (Austria, Belgium, Cambodia, Germany, Hungary, and Romania), 18 weeks (Sweden), viability (Netherlands and to some extent the United States), and 24 weeks (Singapore and Britain)
Some countries, like Canada, China (Mainland only) and Vietnam have no legal limit on when an abortion can be performed.

As of April 2007, 36 states had bans on late-term abortions that were not facially unconstitutional (i.e. banning all abortions) or enjoined by court order. In addition, the Supreme Court in the case of Gonzales v. Carhart
Gonzales v. Carhart
Gonzales v. Carhart, 550 U.S. 124 , is a United States Supreme Court case that upheld the Partial-Birth Abortion Ban Act of 2003. The case reached the high court after U.S. Attorney General Alberto Gonzales appealed a ruling of the United States Court of Appeals for the Eighth Circuit in favor of...
ruled that Congress may ban certain late-term abortion techniques, "both previability and postviability".

All of the 36 state bans are believed by pro-choice organizations to be unconstitutional. The Supreme Court has held that bans must include exceptions for threats to the woman's life, physical health, and mental health, but four states allow late-term abortions only when the woman's life is at risk; four allow them when the woman's life or physical health is at risk, but use a definition of health that pro-choice organizations believe is impermissibly narrow. Assuming that one of these state bans is constitutionally flawed, then that does not necessarily mean that the entire ban would be struck down: "invalidating the statute entirely is not always necessary or justified, for lower courts may be able to render narrower declaratory and injunctive relief."

Ten states require a second physician to approve. The U.S. Supreme Court struck down a requirement of "confirmation by two other physicians" (rather than one other physician) because "acquiescence by co-practitioners has no rational connection with a patient's needs and unduly infringes on the physician's right to practice". Pro-choice organizations such as the Guttmacher Institute
Guttmacher Institute
The Guttmacher Institute is a non-profit organization which works to advance sexual and reproductive health. The institute operates in the United States and globally "through an interrelated program of social science research, policy analysis and public education." According to their mission...
therefore interpret some of these state laws to be unconstitutional, based on these and other Supreme Court rulings, at least to the extent that these state laws require approval of a second or third physician.

Nine states have laws that require a second physician to be present during late-term abortion procedures in order to treat a fetus if born alive. The Court has held that a doctor's right to practice is not infringed by requiring a second physician to be present at abortions performed after viability in order to assist in saving the life of the fetus.

There are at least three medical procedures associated with late-term abortions: