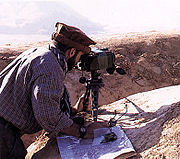 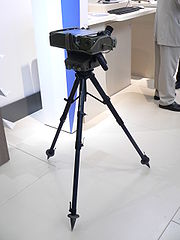 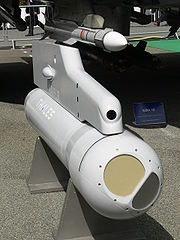 A laser designator is a laser
Laser
A laser is a device that emits light through a process of optical amplification based on the stimulated emission of photons. The term "laser" originated as an acronym for Light Amplification by Stimulated Emission of Radiation...
light source which is used to designate a target. Laser designators provide targeting for laser guided bombs, missiles, or precision artillery
Artillery
Originally applied to any group of infantry primarily armed with projectile weapons, artillery has over time become limited in meaning to refer only to those engines of war that operate by projection of munitions far beyond the range of effect of personal weapons...
munitions, such as the Paveway
Paveway
Paveway is a generic term for Laser Guided Bombs .Pave or PAVE is sometimes used as an acronym for precision avionics vectoring equipment; literally, electronics for controlling the speed and direction of aircraft...
series of bombs, Lockheed-Martin's Hellfire, or the Copperhead
M712 Copperhead
The M712 Copperhead is a caliber cannon-launched, fin-stabilized, terminally laser guided, explosive projectile intended to engage hard point targets such as tanks, self-propelled howitzers or other high-value targets. It may be fired from different artillery pieces, such as the M114, M109 and...
round, respectively.

When a target is marked by a designator, the beam is invisible and does not shine continuously. Instead, a series of coded pulses of laser-light are fired. These signals bounce off the target into the sky, where they are detected by the seeker on the laser guided munition, which steers itself towards the centre of the reflected signal. Unless the people being targeted possess laser detection equipment or can hear aircraft overhead, it is extremely difficult for them to tell whether they are being marked or not. Laser designators work best in clear atmospheric conditions. Cloud cover, rain or smoke can make reliable designation of targets difficult or even impossible.

The U.S. Air Force
United States Air Force
The United States Air Force is the aerial warfare service branch of the United States Armed Forces and one of the American uniformed services. Initially part of the United States Army, the USAF was formed as a separate branch of the military on September 18, 1947 under the National Security Act of...
selected the Lockheed Martin Sniper Pod as their Advanced Targeting Pod (ATP) in 2004. It now equips multiple USAF platforms such as the F-16, F-15E, B-1, B-52, and A-10C. It also operates on multiple international fighter platforms. The U.S. Navy
United States Navy
The United States Navy is the naval warfare service branch of the United States Armed Forces and one of the seven uniformed services of the United States. The U.S. Navy is the largest in the world; its battle fleet tonnage is greater than that of the next 13 largest navies combined. The U.S...
currently employ the Litening II Targeting Pod
LITENING targeting pod
The AN/AAQ-28 LITENING targeting pod is a precision targeting pod system currently operational with a wide variety of combat aircraft. LITENING significantly increases the combat effectiveness of the aircraft during day, night and under-the-weather conditions in the attack of ground and air...
and the Raytheon ATFLIR on a variety of strike aircraft. The Litening II is widely used by many other of the world’s air forces. The United Kingdom’s Royal Air Force
Royal Air Force
The Royal Air Force is the aerial warfare service branch of the British Armed Forces. Formed on 1 April 1918, it is the oldest independent air force in the world...
use the Litening III system and the French use the DAMOCLES and ATLIS II
ATLIS II
The Thomson-CSF ATLIS II is a French laser/electro-optical targeting pod for fighter bomber and attack aircraft.ATLIS was developed starting in 1976, entering service in 1980...
.