Encyclopedia
Larnaca Salt Lake to the west of the town of Larnaca
Larnaca
Larnaca, is the third largest city on the southern coast of Cyprus after Nicosia and Limassol. It has a population of 72,000 and is the island's second largest commercial port and an important tourist resort...
. It is a complex network of four salt lakes (3 of them interconnected) of different sizes. The largest is lake Aliki followed by lake Orphani, lake Soros and lake Spiro. They form the second largest salt lake in Cyprus
Cyprus
Cyprus , officially the Republic of Cyprus , is a Eurasian island country, member of the European Union, in the Eastern Mediterranean, east of Greece, south of Turkey, west of Syria and north of Egypt. It is the third largest island in the Mediterranean Sea.The earliest known human activity on the...
after the Limassol Salt Lake
Limassol Salt Lake
Limassol Salt Lake is the largest inland body of water on the island of Cyprus.It lies due south-east of the sprawling city of Limassol and measures 10.65 km². Its lowest point is 2.7 meters below sea level and at its deepest point the water depth measures about one meter...
. The total surface area of the lakes adds up to 2.2 km² and being just off the road leading to Larnaca International Airport
Larnaca International Airport
Larnaca International Airport is an international airport located southwest of Larnaca, Cyprus. Larnaca International Airport is Cyprus' main international gateway and the larger of the country's two commercial airports, the other being Paphos International Airport on the island's southwestern...
is one of the most distinctive landmarks of the area. It is considered one of the most important wetlands of Cyprus and it has been declared a Ramsar
Ramsar Convention
The Ramsar Convention is an international treaty for the conservation and sustainable utilization of wetlands, i.e., to stem the progressive encroachment on and loss of wetlands now and in the future, recognizing the fundamental ecological functions of wetlands and their economic, cultural,...
site, Natura 2000
Natura 2000
Natura 2000 is an ecological network of protected areas in the territory of the European Union.-Origins:In May 1992, the governments of the European Communities adopted legislation designed to protect the most seriously threatened habitats and species across Europe. This legislation is called the...
site, Special Protected Area under the Barcelona Convention
Barcelona Convention
The 1976 Barcelona Convention for Protection against Pollution in the Mediterranean Sea is a regional convention to prevent and abate pollution from ships, aircraft and land based sources in the Mediterranean Sea. This includes, but is not limited to, dumping, run-off and discharges...
and an Important Bird Area (IBA). It is surrounded by halophytic scrubland and on its bank lies the Hala Sultan Tekke
Hala Sultan Tekke
Hala Sultan Tekke or the Mosque of Umm Haram is a very prominent Muslim shrine near Larnaca, on the island of Cyprus. Umm Haram was the Islamic prophet Muhammad's wet nurse and the wife of Ubada bin al-Samit....
, one of the holiest of shrines within Ottoman Islam
Islam
Islam . The most common are and .   : Arabic pronunciation varies regionally. The first vowel ranges from ~~. The second vowel ranges from ~~~...
. It houses Umm Haram’s tomb, Muhammad
Muhammad
Muhammad |ligature]] at U+FDF4 ;Arabic pronunciation varies regionally; the first vowel ranges from ~~; the second and the last vowel: ~~~. There are dialects which have no stress. In Egypt, it is pronounced not in religious contexts...
's 'wet-nurse'.

Besides its picturesque beauty, the lake is the haunt of 85 species of water-birds with estimated populations between 20,000–38,000. It is one of the important migratory passages through Cyprus. Among them are 2,000–12,000 flamingoes (Phoenicopterus ruber) which spend the winter months there feeding off populations of the brine shrimp
Brine shrimp
Artemia is a genus of aquatic crustaceans known as brine shrimp. Artemia, the only genus in the family Artemiidae, has changed little externally since the Triassic period...
Artemia salina. Other important bird species are the Grus grus, Charadrius alexandrinus, Larus ridibundus, Himantopus himantopus, Burhinus oedicnemus, Hoplopterus spinosus, Oenanthe cypriaca and Sylvia melanothorax. Flocks of birdwatchers gather to observe the blaze of pink from flamingoes as they gather in the centre of the lake but also the other important migrants. The Larnaca Salt Lake complex was declared as a protected area by a decision of the Council of Ministers in 1997.
Recent evidence suggests that contrary to previous belief the Greater Flamingo
Greater Flamingo
The Greater Flamingo is the most widespread species of the flamingo family. It is found in parts of Africa, southern Asia , and southern Europe...
, (Phoenicopterus rubber) not only stops over but also breeds on this wetland. 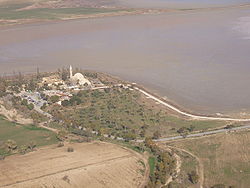 During the winter months the lake fills with water whilst in the summer the water evaporates, leaving a crust of salt and a haze of grey dust. According to legend, the lake's saltiness stems from St Lazarus' request of an old woman for food and drink. She refused, claiming her vines had dried up, to which Lazarus
Lazarus of Bethany
Lazarus of Bethany, also known as Saint Lazarus or Lazarus of the Four Days, is the subject of a prominent miracle attributed to Jesus in the Gospel of John, in which Jesus restores him to life four days after his death...
replied: "may your vines be dry and be a salt lake forever more." A more scientific explanation is that the salt water penetrates the porous rock between the lake and the sea, making the water very salty.

Salt harvested from this lake used to be one of the island's major exports, being collected by donkeys, carried to the edge of the lake and piled up into huge pyramidal heaps. With rising labour costs harvesting dwindled to a negligible amount and stopped altogether in 1986 as the island imports most of this commodity.
The source of this article is wikipedia, the free encyclopedia.  The text of this article is licensed under the GFDL.