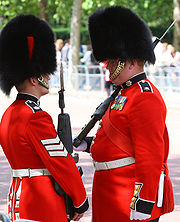 A lance sergeant in the armies of the Commonwealth
Commonwealth of Nations
The Commonwealth of Nations, normally referred to as the Commonwealth and formerly known as the British Commonwealth, is an intergovernmental organisation of fifty-four independent member states...
was a corporal
Corporal
Corporal is a rank in use in some form by most militaries and by some police forces or other uniformed organizations. It is usually equivalent to NATO Rank Code OR-4....
acting in the rank of sergeant
Sergeant
Sergeant is a rank used in some form by most militaries, police forces, and other uniformed organizations around the world. Its origins are the Latin serviens, "one who serves", through the French term Sergent....
. The appointment is retained now only in the Foot Guards
Foot Guards
-British Army:The Foot Guards are the Regular Infantry regiments of the Household Division of the British Army. There have been six regiments of foot guards, five of which still exist. The Royal Guards Reserve Regiment was a reserve formation of the Household Brigade in existence from 1900-1901...
and Honourable Artillery Company
Honourable Artillery Company
The Honourable Artillery Company was incorporated by Royal Charter in 1537 by King Henry VIII. Today it is a Registered Charity whose purpose is to attend to the “better defence of the realm"...
. In these regiments, all corporals are automatically appointed lance sergeant on their promotion, so lance sergeants perform the same duties as corporals in other regiments and are not acting sergeants in anything but name.

The appointment originated in the British Army
British Army
The British Army is the land warfare branch of Her Majesty's Armed Forces in the United Kingdom. It came into being with the unification of the Kingdom of England and Scotland into the Kingdom of Great Britain in 1707. The new British Army incorporated Regiments that had already existed in England...
and Royal Marines
Royal Marines
The Corps of Her Majesty's Royal Marines, commonly just referred to as the Royal Marines , are the marine corps and amphibious infantry of the United Kingdom and, along with the Royal Navy and Royal Fleet Auxiliary, form the Naval Service...
, in which it could be removed by the soldier's commanding officer
Commanding officer
The commanding officer is the officer in command of a military unit. Typically, the commanding officer has ultimate authority over the unit, and is usually given wide latitude to run the unit as he sees fit, within the bounds of military law...
, unlike a full sergeant, who could only be demoted by court martial. Lance sergeants first appeared in the 19th century. The appointment was abolished in 1946, except in the guards' regiments mentioned above. Some cadet units also retained the rank in addition to corporal into at least the 1980s. The Household Cavalry
Household Cavalry
The term Household Cavalry is used across the Commonwealth to describe the cavalry of the Household Divisions, a country’s most elite or historically senior military groupings or those military groupings that provide functions associated directly with the Head of state.Canada's Governor General's...
equivalent is lance-corporal of horse
Lance-Corporal of Horse
Lance-corporal of horse is an appointment unique to the Household Cavalry of the British Army, equivalent to lance sergeant in the Foot Guards. It was introduced in 1971...
.