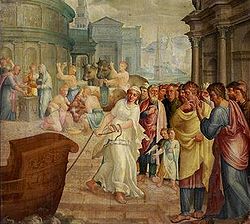 Lambert Lombard was a Renaissance
Renaissance
The Renaissance was a cultural movement that spanned roughly the 14th to the 17th century, beginning in Italy in the Late Middle Ages and later spreading to the rest of Europe. The term is also used more loosely to refer to the historical era, but since the changes of the Renaissance were not...
painter, architect and theorist for the Prince-Bishopric of Liège. During his career he worked for Jan Gossaert in Middelburg
Middelburg
Middelburg is a municipality and a city in the south-western Netherlands and the capital of the province of Zeeland. It is situated in the Midden-Zeeland region. It has a population of about 48,000.- History of Middelburg :...
and trained Frans Floris
Frans Floris
Frans Floris, or more correctly Frans de Vriendt, called Floris was a Flemish painter. He was a member of a large family trained to the study of art in Flanders.-Biography:...
. In 1532 he became court painter
Court painter
A court painter was an artist who painted for the members of a royal or noble family, sometimes on a fixed salary and on an exclusive basis where the artist was not supposed to undertake other work. Especially in the late Middle Ages, they were often given the office of valet de chambre...
and architect in Liège
Liège
Liège is a major city and municipality of Belgium located in the province of Liège, of which it is the economic capital, in Wallonia, the French-speaking region of Belgium....
. A few paintings and many drawings have been preserved.

In 1537 he was sent to Rome
Rome
Rome is the capital of Italy and the country's largest and most populated city and comune, with over 2.7 million residents in . The city is located in the central-western portion of the Italian Peninsula, on the Tiber River within the Lazio region of Italy.Rome's history spans two and a half...
by Erard de la Marck
Erard de la Marck
Erard de la Marck was prince-bishop of Liège from 1506 till 1538. He was the third son of Robert I de la Marck, lord of Sedan and Bouillon....
, prince-bishop of Liège, to buy works of art, and he discovered the wonders of the Italian Renaissance
Italian Renaissance
The Italian Renaissance began the opening phase of the Renaissance, a period of great cultural change and achievement in Europe that spanned the period from the end of the 13th century to about 1600, marking the transition between Medieval and Early Modern Europe...
. On his return he brought not only works of art, but also the new ideas concerning art and the position of the artist, to Liège.