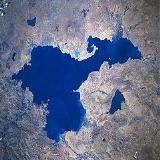 Overview
Lake Van is the largest lake in Turkey, located in the far east of the country in Van district. It is a saline and soda lake, receiving water from numerous small streams that descend from the surrounding mountains. Lake Van is one of the world's largest endorheic lakes (having no outlet). The original outlet from the basin was blocked by an ancient volcanic eruption. Although Lake Van is situated at an altitude of 1640 m (5,380.6 ft) with harsh winters, it does not freeze due to its high salinity except occasionally the shallow northern section.
Lake Van is 119 kilometres (73.9 mi) across at its widest point, averaging a depth of 171 metres (561 ft) with a maximum recorded depth of 451 metres (1,479.7 ft).

Why do people float on Dead Sea and not on Lake Van, which has a higher salinity than Dead Sea?
More
x