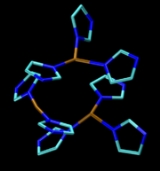 Overview
Laccases are copper-containing oxidase
Oxidase
An oxidase is any enzyme that catalyzes an oxidation-reduction reaction involving molecular oxygen as the electron acceptor. In these reactions, oxygen is reduced to water or hydrogen peroxide ....
enzyme
Enzyme
Enzymes are proteins that catalyze chemical reactions. In enzymatic reactions, the molecules at the beginning of the process, called substrates, are converted into different molecules, called products. Almost all chemical reactions in a biological cell need enzymes in order to occur at rates...
s that are found in many plants, fungi, and microorganisms. The copper is bound in several sites; Type 1, Type 2, and/or Type 3. The ensemble of types 2 and 3 copper is called a trinuclear cluster (see figure). Type 1 copper is available to action of solvents, such as water. It can be displaced by mercury, substituted by cobalt or removed via a copper complexone.

I am working on bacterial laccase. But I face a problem with the purification of the enzyme. It cannaot be precipitated by ammonium sulphate, acetone ...
More

How can we prepare stamdard curve for the laccase estimation
More 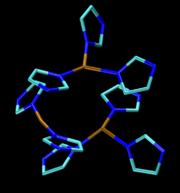 Laccases are copper-containing oxidase
Oxidase
An oxidase is any enzyme that catalyzes an oxidation-reduction reaction involving molecular oxygen as the electron acceptor. In these reactions, oxygen is reduced to water or hydrogen peroxide ....
enzyme
Enzyme
Enzymes are proteins that catalyze chemical reactions. In enzymatic reactions, the molecules at the beginning of the process, called substrates, are converted into different molecules, called products. Almost all chemical reactions in a biological cell need enzymes in order to occur at rates...
s that are found in many plants, fungi, and microorganisms. The copper is bound in several sites; Type 1, Type 2, and/or Type 3. The ensemble of types 2 and 3 copper is called a trinuclear cluster (see figure). Type 1 copper is available to action of solvents, such as water. It can be displaced by mercury, substituted by cobalt or removed via a copper complexone. Removal of type 1 copper causes a decrease in laccase activity. Cyanide can remove all copper from the enzyme however re-embedding with type 1 and type 2 copper has been shown to be impossible. Type 3 copper however can be embed back into the enzyme. Laccases act on phenol
Phenol
Phenol, also known as carbolic acid, phenic acid, is an organic compound with the chemical formula C6H5OH. It is a white crystalline solid. The molecule consists of a phenyl , bonded to a hydroxyl group. It is produced on a large scale as a precursor to many materials and useful compounds...
s and similar molecules, performing a one-electron oxidations, which remain poorly defined. It is proposed that laccases play a role in the formation of lignin
Lignin
Lignin or lignen is a complex chemical compound most commonly derived from wood, and an integral part of the secondary cell walls of plants and some algae. The term was introduced in 1819 by de Candolle and is derived from the Latin word lignum, meaning wood...
by promoting the oxidative coupling of lignol
Lignol
Lignol is a commune in the Morbihan department of Brittany in north-western France.-Demographics:Inhabitants of Lignol are called in French Lignolais. There is a church in this town that was built during the 14th century. During the presidential 2007 elections, inhabitants voted for Nicolas...
s, a family of naturally occurring phenols
Polyphenol
Polyphenols are a structural class of natural, synthetic, and semisynthetic organic chemicals characterized by the presence of large multiples of phenol structural units...
. Laccases can be polymeric, and the enzymatically active form can be a dimer or trimer. Other laccases, such as ones produced by the fungus Pleurotus ostreatus, play a role in the degradation of lignin, and can therefore be included in the broad category of ligninase
Ligninase
Ligninase is the original term encompassing many different types of oxidative, extracellular fungal enzymes which catalyze the breakdown of lignin which is commonly found in the cell walls of plants...
s.

Because laccase belongs to the oxidase enzyme family it requires oxygen as a second substrate for the enzymatic action.

Spectrophotometry can be used to detect laccases, using the substrates ABTS
ABTS
In biochemistry, 2,2'-azino-bis or ABTS is chemical compound used to observe the reaction kinetics of specific enzymes...
, syringaldazine, 2,6-dimethoxyphenol, and dimethyl-p-phenylenediamine. Activity can also be monitored with an oxygen sensor
Oxygen sensor
An oxygen sensor, or lambda sensor, is an electronic device that measures the proportion of oxygen in the gas or liquid being analyzed. It was developed by the Robert Bosch GmbH company during the late 1960s under the supervision of Dr. Günter Bauman...
, as the oxidation of the substrate is paired with the reduction of oxygen to water.

Laccases do not release toxic peroxide intermediates. The four copper centers creates four monoelectronic oxidations of a substrate which is catalyzed by type 1 copper. From type 1 copper, the electrons are transferred to the trinuclear cluster of type 2 and type 3 copper. This is where the reduction of oxygen and release of water takes place. It is because of the various copper centers that allow the reduction of substrate to oxygen without generation of toxic intermediates. The products of oxidation can undergo non-enzymatic reactions such as cross linking of monomers, degradation of polymers and ring cleavage of aromatics.
Crosslinking of monomers

Both phenolic compounds and anilines generate radicals when oxidized by laccase. These radicals can form dimers, oligomers or polymers via a covalent bond between C-C, C-O or C-N.
Degradation of polymers

Laccase can degrade complex polymers such as lignin or humic acids. Reactive radicals generate cause cleavage of covalent bonds and formation of monomers. Because complex polymers are large it may create steric hindrance and prevent direct enzyme contact. Laccase can also oxidize small organic compounds or metals. These compounds once oxidized can cause radical degradation and depolymerization of larger polymers.

Laccase is able to catalyze ring cleavage of aromatic compounds.

Laccases have been examined as the cathode in enzymatic biofuel cells
Enzymatic Biofuel Cells
An Enzymatic Biofuel Cell is a specific type of fuel cell which uses biocatalysts to convert energy stored within chemicals into electrical energy. Enzymes are used to catalytically oxidise the fuel at the anode and reduce the ensuing oxidant at the cathode...
. They can be paired with an electron mediator to facilitate electron transfer to a solid electrode wire. Laccases are some of the few oxidoreductases commercialized as industrial catalysts. The enzymes can be used for textile dyeing/textile finishing, wine cork making, teeth whitening, and many other industrial, environmental, diagnostic, and synthetic uses. Laccases can be used in bioremediation
Bioremediation
Bioremediation is the use of microorganism metabolism to remove pollutants. Technologies can be generally classified as in situ or ex situ. In situ bioremediation involves treating the contaminated material at the site, while ex situ involves the removal of the contaminated material to be treated...
. Protein ligand docking can be used to predict the putative pollutants that can be degraded by laccase.


Activity of Laccase in Wheat Dough

Laccases have the potential to cross link food polymers such as proteins and nonstarch polysaccharides in dough. In non starch polysaccharides, such as arabinoxylans (AX), laccase catalyzes the oxidative gelation of feruloylated arabinoxylans by dimerization of their ferulic esters. These cross links have been found to greatly increased the maximum resistance and decreased extensibility of the dough. The resitance was increased due to the crosslinking of AX via ferulic acid and resulting in a strong AX and gluten network. Although laccase is known to cross link AX, under the microscope it was found that the laccase also acted on the flour proteins. Oxidation of the ferulic acid on AX to form ferulic acid radicals increased the oxidation rate of free SH groups on the gluten proteins and thus influenced the formation of S-S bonds between gluten polymers. Laccase is also able to oxidize peptide bound tyrosine, but very poorly. Because of the increased strength of the dough, it formed irregular bubble formation during proofing. This was a result of the gas (carbon dioxide) becoming trapped within the crust and could not diffuse out (like it would have normally) and causing abnormal pore size. Resistance and extensibility was a function of dosage, but at very high dosage the dough showed contradictory results: max resistance was reduced drastically. The high dosage may have caused extreme changes in structure of dough, resulting in incomplete gluten formation. Another reason is that it may mimic overmixing, causing negative effects on gluten structure. Laccase treated dough had low stability over prolonged storage. The dough became softer and this is related to laccase mediation. The laccase mediated radical mechanism creates secondary reactions of FA-dervived radicals that result in breaking of covalent linkages in AX and weakening of the AX gel.


Use in Food Industry

The hazing effect is a quality defect in beer. It is characterized by “cloudiness” in the final product. Laccase can be added to the wort or at the end of the process to remove the polyphenols that may still remain in beer. The polyphenol complexes, formed by laccases, can be separated via filtration and removes probability of the hazing effect from occuring. Because oxygen is not desired in beer, laccase can also remove excess oxygen and increase the storage life of beer.
In fruit juices such as apple and grape, excess oxidation of phenolics causes negative effects on the taste, color, odour and mouthfeel. Laccasae has been proposed to delay the oxidation of polyphenols and stabilize the juice.