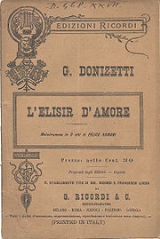 Encyclopedia
L'elisir d'amore is an opera by the Italian composer Gaetano Donizetti
Gaetano Donizetti
Domenico Gaetano Maria Donizetti was an Italian composer from Bergamo, Lombardy. His best-known works are the operas L'elisir d'amore , Lucia di Lammermoor , and Don Pasquale , all in Italian, and the French operas La favorite and La fille du régiment...
. It is a melodramma
Melodramma
Melodramma is an Italian term for opera, used in a much narrower sense by English writers to discuss developments in the early 19th century Italian libretto...
giocoso in two acts. Felice Romani
Felice Romani
Felice Romani was an Italian poet and scholar of literature and mythology who wrote many librettos for the opera composers Donizetti and Bellini. Romani was considered the finest Italian librettist between Metastasio and Boito.-Biography:Born Giuseppe Felice Romani to a bourgeois family in Genoa,...
wrote the Italian
Italian language
Italian is a Romance language spoken mainly in Europe: Italy, Switzerland, San Marino, Vatican City, by minorities in Malta, Monaco, Croatia, Slovenia, France, Libya, Eritrea, and Somalia, and by immigrant communities in the Americas and Australia...
libretto
Libretto
A libretto is the text used in an extended musical work such as an opera, operetta, masque, oratorio, cantata, or musical. The term "libretto" is also sometimes used to refer to the text of major liturgical works, such as mass, requiem, and sacred cantata, or even the story line of a...
, after Eugène Scribe
Eugène Scribe
Augustin Eugène Scribe , was a French dramatist and librettist. He is best known for the perfection of the so-called "well-made play" . This dramatic formula was a mainstay of popular theater for over 100 years.-Biography:...
's libretto for Daniel-François-Esprit Auber's Le philtre (1831).

L'elisir d'amore is one of the most frequently performed of all Donizetti's operas, and there are a number of recordings. It appears as number 12 on the Operabase
Operabase
Operabase is an on-line database of opera performances, opera houses and companies, performers themselves as well as their agents. Operabase, found at operabase.com, is owned and operated by Operabase Ltd, a company located in Luton, England. The site started in 1996 as the hobby of Mike Gibb,...
list of the most-performed operas worldwide. It contains the popular aria
Aria
An aria in music was originally any expressive melody, usually, but not always, performed by a singer. The term is now used almost exclusively to describe a self-contained piece for one voice usually with orchestral accompaniment...
"Una furtiva lagrima
Una furtiva lagrima
Una furtiva lagrima is the romanza taken from Act II, Scene VIII of the Italian opera, L'elisir d'amore by Gaetano Donizetti. It is sung by Nemorino when he finds that the love potion he bought to win his dream lady’s heart, Adina, works.Nemorino is in love with Adina, but she isn't interested in...
," one of the most famous and often-excerpted arias in all of opera.

The premiere of L'elisir d'amore was at the Teatro della Canobbiana, Milan
Milan
Milan is the second-largest city in Italy and the capital city of the region of Lombardy and of the province of Milan. The city proper has a population of about 1.3 million, while its urban area, roughly coinciding with its administrative province and the bordering Province of Monza and Brianza ,...
on 12 May 1832. 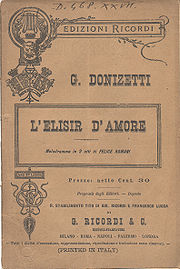 Place: A small village in the Basque Country.
[The Schirmer English edition of the score states that the action takes place 'In a small Italian Village'].
Time: The end of the 18th century

The opening of this comic opera finds Nemorino, a poor peasant, in love with Adina, a beautiful landowner, who torments Nemorino with her indifference. When Nemorino hears Adina reading to her workers the story of Tristan and Isolde
Tristan and Iseult
The legend of Tristan and Iseult is an influential romance and tragedy, retold in numerous sources with as many variations. The tragic story is of the adulterous love between the Cornish knight Tristan and the Irish princess Iseult...
, he is convinced that a magic potion will gain Adina's love for him. He is afraid she loves the self-important Sergeant Belcore who appears with his regiment and immediately proposes marriage to Adina in front of everyone. The traveling quack salesman, Dulcamara (the self-proclaimed Dr. Encyclopedia), arrives, selling his bottled cure-all to the townspeople. Nemorino innocently asks Dulcamara if he has anything like Isolde's love potion. Dulcamara says he does, selling it to Nemorino at a price matching the contents of Nemorino's pockets. 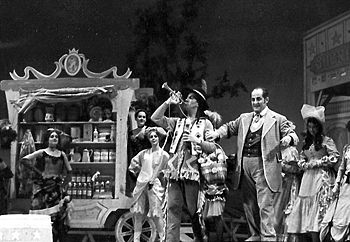 Unknown to Nemorino, the bottle contains only wine. And, in order to make a timely escape, Dulcamara tells Nemorino the potion will not take effect until the next day. Nemorino drinks it, feeling its effects immediately. Emboldened by the 'elixir' Nemorino encounters Adina, and although she teases him mercilessly, the audience senses that the attraction just might be mutual, were it not for the marriage proposal of the impressive and pompous sergeant. In fact, their wedding date had been set for six days hence. Nemorino's confidence that tomorrow he will win Adina by virtue of the elixir, causes him to act indifferently toward her. This upsets Adina, but she attempts to hide her feelings. Instead, she ups the ante as well by agreeing to Sergeant Belcore's alternate suggestion: that they marry immediately as he has just received orders that the regiment must ship off the next morning. Both Adina and the Sergeant gauge Nemorino's reaction to this news, the Sergeant with resentment, Adina with despair. Nemorino is, of course panicked, and cries out for Doctor Dulcamara to come to his aid.

Adina's outdoor wedding party is in full swing. Dr. Dulcamara is there, and performs a song with Adina to entertain the guests. The notary arrives to make the marriage official. Adina is sad to see that Nemorino has not appeared. Everyone goes inside to sign the wedding contract. But Dulcamara stays outside, helping himself to food and drink. Nemorino appears, having seen the notary, realizes that he has lost Adina. He sees the Doctor and frantically begs him for more elixir, of the type that will work immediately. But because Nemorino has no money, the Doctor refuses, disappearing inside. The Sergeant emerges, alone, wondering aloud why Adina has suddenly put off the wedding and the signing of the contract. Nemorino spots his rival, but is powerless to do anything. The Sergeant asks about Nemorino's dejection. When Nemorino says he has no money Belcore immediately suggests that if he joins the army he'll be paid immediately. He produces a contract, which Nemorino signs (with an X) in return for the cash Belcore gives him on the spot. Nemorino privately vows to fly to Dulcamara for more potion, while Belcore muses that he has easily dispatched of his rival by sending him off to war.

Later that evening the women of the village are gossiping that Nemorino is unaware that he has just inherited a large fortune from his deceased uncle. They spot Nemorino, who has clearly spent his military signing bonus, and has bought and consumed a large amount of 'elixir' (wine again) from Dr. Dulcamara. The women approach Nemorino with overly friendly greetings, the likes of which he has never seen. This is proof to Nemorino that this dose of the elixir has worked. Adina sees Nemorino in a jolly mood and, encountering Dr. Dulcamara, wonders what has gotten into him. Dulcamara, unaware that Adina is the object of Nemorino's affection, tells her the story of the smitten bumpkin who spent his last penny on the elixir, and even signed his life away, joining the army for money to get more, so desperate was he to win the love of some unnamed cruel beauty. Adina immediately realizes Nemorino's sincerity, and regrets teasing him. She falls for Nemorino, basking in the sincerity of his love. Dulcamara interprets this behavior as some sort of condition requiring a cure by one of his potions.

They depart. Nemorino appears alone, pensive, reflecting on a tear he saw in Adina's eye when he was ignoring her earlier. Based on that tear alone, he is sincerely convinced that Adina loves him. She enters, asking him why he has chosen to join the army and leave the town. When Nemorino says he's seeking a better life, Adina responds by telling him he is loved, and that she has purchased his military contract from Sergeant Belcore. She offers the cancelled contract to Nemorino, asking him to take it. He is free now. She says, however, that if he stays, he will no longer be sad. As he takes the contract Adina turns to leave. Nemorino believes she is abandoning him and flies in to a desperate fit, vowing that if he is not loved, if the elixir has not worked, and the Doctor has fooled him, then he might as well go off and die a soldier. Adina stops him and confesses that she loves him. Nemorino is ecstatic. Adina begs him to forgive her for teasing him. He does so with a kiss. The sergeant returns, seeing the two in an embrace. Adina explains that she loves Nemorino. The Sergeant takes the news in stride, noting that there are plenty of other women in the world. Dulcamara, his bags packed, pops out of a doorway, adding that he will happily provide elixir for the Sergeant's next conquest. A crowd has gathered by now, all agreeing that the elixir has done its job as they bid a fond farewell to the doctor.

In 2011, Divaria Productions in New York City set the opera in a golf resort in the modern age.