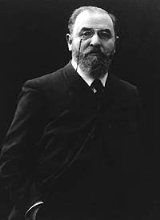 He was born in Paris, and was trained in law. After holding a subordinate office (1876) in the department of public works, he became successively prefect of the Tarn (1882) and the Haute-Garonne
Haute-Garonne
Haute-Garonne is a department in the southwest of France named after the Garonne river. Its main city is Toulouse.-History:Haute-Garonne is one of the original 83 departments created during the French Revolution on March 4, 1790. It was created from part of the former province of Languedoc.The...
(1885), and then returned to Paris to enter the ministry of the interior. He became prefect of police in November 1887, at the critical moment of Jules Grévy
Jules Grévy
François Paul Jules Grévy was a President of the French Third Republic and one of the leaders of the Opportunist Republicans faction. Given that his predecessors were monarchists who tried without success to restore the French monarchy, Grévy is seen as the first real republican President of...
's resignation from the presidency. In the following year he entered the chamber, being elected deputy for the Marne
Marne
Marne is a department in north-eastern France named after the river Marne which flows through the department. The prefecture of Marne is Châlons-en-Champagne...
, in opposition to General Boulanger, and joined the radical left. He was under-secretary for home affairs in Charles Floquet
Charles Floquet
-Biography:He was born at Saint-Jean-Pied-de-Port . He studied law in Paris, and was called to the bar in 1851. The coup d'état of that year aroused the strenuous opposition of Floquet, who had, while yet a student, given proof of his republican sympathies by taking part in the fighting of 1848...
's ministry of 1888, and resigned with it in 1889, being then returned to the chamber for Reims. In the Pierre Tirard
Pierre Tirard
Pierre Emmanuel Tirard was a French politician.He was born to French parents in Geneva, Switzerland. After studying in his native town, Tirard became a civil engineer. After five years of government service he resigned to become a jewel merchant...
's ministry, which succeeded, he was minister of the interior, and subsequently, on 18 March 1890, minister of public instruction in the cabinet of Freycinet, a post for which he had qualified himself by the attention he had given to educational matters. In this capacity he was responsible in 1890 for some important reforms in secondary education.

He retained his office in Émile Loubet
Émile Loubet
Émile François Loubet was a French politician and the 8th President of France.-Early life:He was born the son of a peasant proprietor and mayor of Marsanne . Admitted to the Parisian bar in 1862, he took his doctorate in law the next year...
's cabinet in 1892, and was minister of justice under Alexandre Ribot
Alexandre Ribot
Alexandre-Félix-Joseph Ribot was a French politician, four times Prime Minister.-Biography:He was born in Saint-Omer, Pas-de-Calais.After a brilliant academic career at the University of Paris, where he was lauréat of the faculty of law, he rapidly made his mark at the bar...
at the end of that year, when the Panama scandals
Panama scandals
The Panama scandals was a corruption affair that broke out in the French Third Republic in 1892, linked to the building of the Panama Canal...
were making the office one of peculiar difficulty. He energetically pressed the Panama prosecution, so much so that he was accused of having put wrongful pressure on the wife of one of the defendants in order to procure evidence. To meet the charge, he resigned in March 1893 but again took office and retired only with the rest of the Freycinet ministry.

In November 1895 he formed his own cabinet, distinctively radical, which fell as the result of a constitutional crisis arising from the persistent refusal of the senate to vote supply. The Bourgeois ministry seemed to think that popular opinion would enable them to override what they regarded as an unconstitutional action on the part of the upper house; but the public was indifferent and the senate triumphed. The blow damaged Bourgeois's career as an homme de gouvernement. As minister of public instruction in the Brisson
Henri Brisson
Eugène Henri Brisson was a French statesman, Prime Minister of France for a period in 1885-1886 and again in 1898.-Biography:He was born at Bourges , and followed his father’s profession of advocate. Having made his mark in opposition during the last days of the empire, he was appointed...
cabinet of 1898 he organized courses for adults in primary education. After this short ministry he represented his country with dignity and effect at the Hague peace congress, and in 1903 was nominated a member of the permanent court of arbitration.

He held somewhat aloof from the political struggles of the Waldeck-Rousseau and Combes
Émile Combes
Émile Combes was a French statesman who led the Bloc des gauches's cabinet from June 1902 – January 1905.-Biography:Émile Combes was born in Roquecourbe, Tarn. He studied for the priesthood, but abandoned the idea before ordination. His anti-clericalism would later lead him into becoming a...
ministries, travelling considerably in foreign countries. In 1902 and 1903 he was elected president of the chamber. In 1905 he replaced the duc d'Audiffret-Pasquier as senator for the department of Marne, and in May 1906 became minister of foreign affairs in the Sarrien cabinet. He was responsible for the direction of French diplomacy in the conference at Algeciras
Algeciras
Algeciras is a port city in the south of Spain, and is the largest city on the Bay of Gibraltar . Port of Algeciras is one of the largest ports in Europe and in the world in three categories: container,...
. He was delegate to both Hague Conferences held on 1899 and 1907
Hague Conventions (1899 and 1907)
The Hague Conventions were two international treaties negotiated at international peace conferences at The Hague in the Netherlands: The First Hague Conference in 1899 and the Second Hague Conference in 1907...
. Bourgeois also became delegate to Paris Peace Conference
Paris Peace Conference, 1919
The Paris Peace Conference was the meeting of the Allied victors following the end of World War I to set the peace terms for the defeated Central Powers following the armistices of 1918. It took place in Paris in 1919 and involved diplomats from more than 32 countries and nationalities...
and strongly support Japanese Racial Equality Proposal
Racial Equality Proposal, 1919
The Racial Equality Proposal was a Japanese proposal for racial equality at the Paris Peace Conference.-The proposal:After the end of seclusion, Japan suffered unequal treaties and demanded equal status with the Powers. In this context, the Japanese delegation to the Paris peace conference proposed...
as "an indisputable principle of justice".

A social republican, Leon Bourgeois sought a middle ground between socialism and capitalism which he termed “solidarism,” where the better off had a social debt to the poor which they should pay by the income tax, thus providing the state with the necessary revenue to finance social measures for those living in poverty. However, the Senate opposed his proposal and opposition grew until his resignation as prime minister.