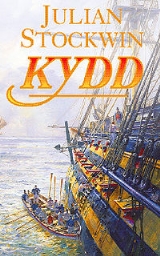 Encyclopedia
Kydd, first published in 2001, is a historical novel
Historical novel
According to Encyclopædia Britannica, a historical novel is-Development:An early example of historical prose fiction is Luó Guànzhōng's 14th century Romance of the Three Kingdoms, which covers one of the most important periods of Chinese history and left a lasting impact on Chinese culture.The...
by Julian Stockwin
Julian Stockwin
Julian Stockwin is an author of historical action-adventure fiction.-Biography:Born in 1944, Stockwin soon developed a love for the sea...
. This first instalment in Julian Stockwin's series of novels set during the Age of Fighting Sail tells the story of young Kydd, who is pressed into service on a British ship in 1793. The book is unusual in that the hero is an ordinary pressed
Impressment
Impressment, colloquially, "the Press", was the act of taking men into a navy by force and without notice. It was used by the Royal Navy, beginning in 1664 and during the 18th and early 19th centuries, in wartime, as a means of crewing warships, although legal sanction for the practice goes back to...
man, not an officer as is most common in nautical fiction.

The story: The year is 1793. Europe is ablaze with war. The Prime Minister, Pitt, is under pressure to make an active move at sea, and despatches a squadron to appear off the French coast. To man the ships, ordinary people must be press-ganged. Thomas Paine Kydd, a young wig-maker from Guildford
Guildford
Guildford is the county town of Surrey. England, as well as the seat for the borough of Guildford and the administrative headquarters of the South East England region...
, is seized, taken across the country to Sheerness and the great fleet anchorage of the Nore to be part of the crew of the fictional 98-gun line-of-battle ship Duke William.

The ship sails immediately and Kydd quickly has to learn the harsh realities of shipboard life fast; but despite all that he goes through in danger of tempest and battle he comes to admire the skills and courage of the seamen — taking up the challenge himself to become a true sailor.