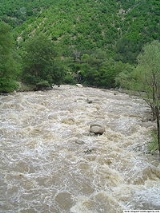 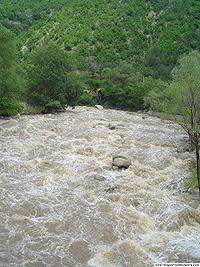 The Kresna Gorge is a stunning steep valley in southwestern Bulgaria
Bulgaria
Bulgaria , officially the Republic of Bulgaria , is a parliamentary democracy within a unitary constitutional republic in Southeast Europe. The country borders Romania to the north, Serbia and Macedonia to the west, Greece and Turkey to the south, as well as the Black Sea to the east...
. The Struma River
Struma River
The Struma or Strymónas is a river in Bulgaria and Greece. Its ancient name was Strymōn . Its catchment area is 10,800 km²...
, which stems off of Vitosha
Vitosha
Vitosha is a mountain massif, on the outskirts of Sofia, the capital of Bulgaria. Vitosha is one of the tourists symbols of Sofia and the closest site for hiking, alpinism and skiing. Convenient bus lines and rope ways render the mountain easily accessible. Vitosha has the outlines of an enormous...
mountains, is what formed this spectacular site. The gorge is rich in biodiversity
Biodiversity
Biodiversity is the degree of variation of life forms within a given ecosystem, biome, or an entire planet. Biodiversity is a measure of the health of ecosystems. Biodiversity is in part a function of climate. In terrestrial habitats, tropical regions are typically rich whereas polar regions...
, which may be in danger of the project to build the Struma Motorway, which is part of Trans European Corridor No. 4.

The Kresna Gorge was the place of battle
Battle of Kresna Gorge
The Battle of Kresna Gorge was fought in 1913 between the Greeks and the Bulgarians during the Second Balkan War.After the Serbian front became static, and seeing that the Bulgarian Army in his front had already suffered defeat, King Constantine ordered the Greek Army to march further into...
between Bulgaria and Greece
Greece
Greece , officially the Hellenic Republic , and historically Hellas or the Republic of Greece in English, is a country in southeastern Europe....
during the 1913 Second Balkan War
Second Balkan War
The Second Balkan War was a conflict which broke out when Bulgaria, dissatisfied with its share of the spoils of the First Balkan War, attacked its former allies, Serbia and Greece, on 29 June 1913. Bulgaria had a prewar agreement about the division of region of Macedonia...
. The Greek army was trapped in the valley, but the Bulgarians could not to signal their victory to their negotiators in Bucharest
Bucharest
Bucharest is the capital municipality, cultural, industrial, and financial centre of Romania. It is the largest city in Romania, located in the southeast of the country, at , and lies on the banks of the Dâmbovița River....
, where a peace treaty unfavorable to Bulgaria's territorial aspirations was signed.