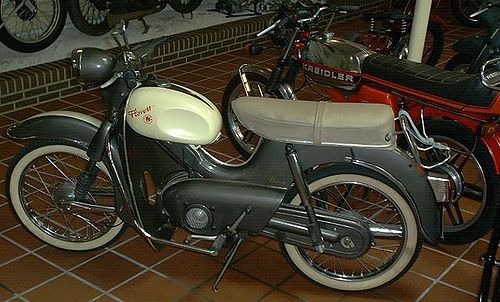 Kreidler was a German manufacturer of small motorcycles and mopeds, based in Kornwestheim
Kornwestheim
Kornwestheim is a town in the district of Ludwigsburg, Baden-Württemberg, Germany. It is situated about 10 km north of Stuttgart, and 5 km south of Ludwigsburg.-Entertainment:...
, between Ludwigsburg
Ludwigsburg
Ludwigsburg is a city in Baden-Württemberg, Germany, about north of Stuttgart city centre, near the river Neckar. It is the largest and primary city of the Ludwigsburg urban district with about 87,000 inhabitants...
and Stuttgart
Stuttgart
Stuttgart is the capital of the state of Baden-Württemberg in southern Germany. The sixth-largest city in Germany, Stuttgart has a population of 600,038 while the metropolitan area has a population of 5.3 million ....
. The company was founded in 1903 as "Kreidlers Metall- und Drahtwerke" (Kreidlers metal and wire factory) by Anton Kreidler and started to build motorcycles in 1951. In 1959 one third of all German motorcycles were Kreidler. In the '70s Kreidler had very great success in motorsport. Especially in the Netherlands the riders Jan de Vries and Henk van Kessel
Henk van Kessel
Henk van Kessel is a former Grand Prix motorcycle road racer. He won the 1974 F.I.M. 50 cc world championship. He won seven Grand Prix races during his lengthy career.- External links :*...
were very successful.

The company went out of business in 1982; the rights to the trademark were sold to the businessman Rudolf Scheidt who had Italian manufacturer Garelli Motorcycles
Garelli Motorcycles
Garelli Motorcycles is an Italian moped, and motorcycle manufacturer. It was founded in 1919 by Alberto Garelli.At age 22, Adalberto Garelli received a degree in engineering and dedicated his work to developing and perfecting the 2-stroke engine for Fiat. Garelli quit in 1911 due to Fiat's lack of...
make mopeds under the Kreidler name until 1988. The rights to the Kreidler mark have since been bought by bicycle manufacturer Prophete
Prophete
Prophete GmbH u. Co. KG is a German bicycle manufacturer that traditionally trades under the Prophete brand name. The company started out in 1908 as a bicycle workshop based in Halle an der Saale, but at the end of World War II the Prophete family moved the company to Rheda-Wiedenbrück in West...
.