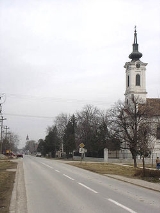 In Serbian
Serbian language
Serbian is a form of Serbo-Croatian, a South Slavic language, spoken by Serbs in Serbia, Bosnia and Herzegovina, Montenegro, Croatia and neighbouring countries....
, the village is known as Kovilj or Ковиљ, in Croatian
Croatian language
Croatian is the collective name for the standard language and dialects spoken by Croats, principally in Croatia, Bosnia and Herzegovina, the Serbian province of Vojvodina and other neighbouring countries...
as Kovilj, and in Hungarian
Hungarian language
Hungarian is a Uralic language, part of the Ugric group. With some 14 million speakers, it is one of the most widely spoken non-Indo-European languages in Europe....
as Kabol.

The Serbian name of the village derived from Serbian word "kovilj", which is a name for one sort of flower grass.

The village is divided into Gornji Kovilj (Upper Kovilj) and Donji Kovilj (Lower Kovilj), which were two separate settlements in the past, but today are parts of one single settlement.

In the 13th century, a settlement named Kabul was mentioned at this location. Other names used for the settlement in the past were Kaboli and Kobila, hence it is presumed that name of the settlement derived from Slavic word "kobila" ("mare" in English).

Donji Kovilj was first mentioned in 1554, and Gornji Kovilj in 1702. Two villages were joined in 1870. Near the village is well known Kovilj Monastery
Kovilj monastery
The Kovilj Monastery is a 13th century Serb Orthodox monastery in the Bačka region, in the northern Serbian province of Vojvodina. It is near the village of Kovilj, in the Novi Sad municipality. The monastery was renovated in 1705-1707...
. The monastery was reconstructed in 1705-1707, but according to the legend, it was founded by the first Serb archbishop Saint Sava
Saint Sava
Saint Sava was a Serbian Prince and Orthodox monk, the first Archbishop of the autocephalous Serbian Church, the founder of Serbian law and literature, and a diplomat. Sava was born Rastko Nemanjić , the youngest son of Serbian Grand Župan Stefan Nemanja , and ruled the appanage of Hum briefly in...
in the 13th century. There are also two Orthodox churches in the village, from 1824/28 and 1846 respectively.