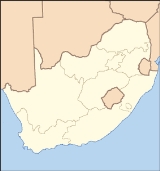 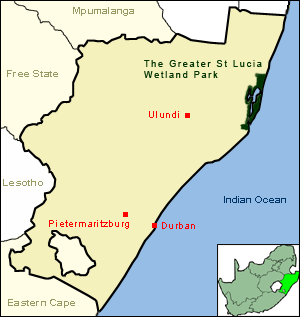 The lakes form part of the iSimangaliso Wetland Park, a UNESCO
UNESCO
The United Nations Educational, Scientific and Cultural Organization is a specialized agency of the United Nations...
World Heritage Site
World Heritage Site
A UNESCO World Heritage Site is a place that is listed by the UNESCO as of special cultural or physical significance...
.
The closest town is Manguzi, some 13 kilometres (8.1 mi) away from it. Kosi Bay estuary is only 2 kilometres (1.2 mi) from the Mozambique
Mozambique
Mozambique, officially the Republic of Mozambique , is a country in southeastern Africa bordered by the Indian Ocean to the east, Tanzania to the north, Malawi and Zambia to the northwest, Zimbabwe to the west and Swaziland and South Africa to the southwest...
border. It is possible to walk from the estuary to Ponta do Ouro in only an hour or so. It is one of the quietest beaches in South Africa.The Kosi River Mouth is known as "the aquarium" because of the clarity of the water and the abundance of fish species.

Bird species in the area include the Palm-nut Vulture
Palm-nut Vulture
The Palm-nut Vulture or Vulturine Fish Eagle, is a very large bird of prey in the family Accipitridae which also includes many other diurnal raptors such as kites, buzzards and harriers, vultures, and eagles. It is the only member of the genus Gypohierax...
, Pel's Fishing Owl, White-backed Night-heron
White-backed Night-heron
The White-backed Night Heron is a species of heron in the Ardeidae family. This relatively small and dark night heron is found throughout a large part of sub-Saharan Africa. It was formerly placed in the genus Nycticorax....
, and kingfishers. Duiker
Duiker
A duiker is any of about 21 small to medium-sized antelope species from the subfamily Cephalophinae native to Sub-Saharan Africa.Duikers are shy and elusive creatures with a fondness for dense cover; most are forest dwellers and even the species living in more open areas are quick to disappear...
, hippopotamus
Hippopotamus
The hippopotamus , or hippo, from the ancient Greek for "river horse" , is a large, mostly herbivorous mammal in sub-Saharan Africa, and one of only two extant species in the family Hippopotamidae After the elephant and rhinoceros, the hippopotamus is the third largest land mammal and the heaviest...
, crocodiles and Bull sharks are also present, and loggerhead and leatherback sea turtles lay their eggs on the beach. The Bay is noted for its aggressive Bull shark population. The sharks are locally known as Zambesi.
The Kosi Palm has the largest leaf of any plant in the plant kingdom. Endemic species include the Kosi cycad, Kosi Fern and cycads. It is one of very few places on Earth where 5 different species of Mangrove trees are found in one area.
Kosi Bay is particularly famous for the traditional fish traps built to trap fish moving in and out of the estuary with the tide.