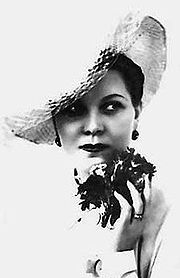 Klavdiya Ivanovna Shulzhenko ' onMouseout='HidePop("94735")' href="/topics/Moscow">Moscow
Moscow
Moscow is the capital, the most populous city, and the most populous federal subject of Russia. The city is a major political, economic, cultural, scientific, religious, financial, educational, and transportation centre of Russia and the continent...
) was a popular female singer of the Soviet Union
Soviet Union
The Soviet Union , officially the Union of Soviet Socialist Republics , was a constitutionally socialist state that existed in Eurasia between 1922 and 1991....
.

Shulzhenko started singing with jazz
Jazz
Jazz is a musical style that originated at the beginning of the 20th century in African American communities in the Southern United States. It was born out of a mix of African and European music traditions. From its early development until the present, jazz has incorporated music from 19th and 20th...
and pop
Pop music
Pop music is usually understood to be commercially recorded music, often oriented toward a youth market, usually consisting of relatively short, simple songs utilizing technological innovations to produce new variations on existing themes.- Definitions :David Hatch and Stephen Millward define pop...
bands in the late 1920s. She rose to fame in the late 1930s with her version of Sebastian Yradier's La Paloma. In 1939, she was awarded at the first all-Soviet competition of pop singers.

During World War II
World War II
World War II, or the Second World War , was a global conflict lasting from 1939 to 1945, involving most of the world's nations—including all of the great powers—eventually forming two opposing military alliances: the Allies and the Axis...
, Shulzhenko performed about a thousand concerts for Soviet soldiers in besieged Leningrad
Siege of Leningrad
The Siege of Leningrad, also known as the Leningrad Blockade was a prolonged military operation resulting from the failure of the German Army Group North to capture Leningrad, now known as Saint Petersburg, in the Eastern Front theatre of World War II. It started on 8 September 1941, when the last...
and elsewhere. The lyrics of one of her prewar songs, The Blue Headscarf, were adapted so as to suit wartime realities. Another iconic song of the Eastern Front (World War II)
Eastern Front (World War II)
The Eastern Front of World War II was a theatre of World War II between the European Axis powers and co-belligerent Finland against the Soviet Union, Poland, and some other Allies which encompassed Northern, Southern and Eastern Europe from 22 June 1941 to 9 May 1945...
, Let's Smoke, was later used by Vladimir Menshov
Vladimir Menshov
Vladimir Valentinovich Menshov is a Soviet and Russian actor and film director. He is noted for depicting the Russian everyman and working class life in his films. Like many other Russian filmmakers, he studied acting and directing at the state film school VGIK, the world's oldest educational...
in his Oscar
Academy Awards
An Academy Award, also known as an Oscar, is an accolade bestowed by the American Academy of Motion Picture Arts and Sciences to recognize excellence of professionals in the film industry, including directors, actors, and writers...
-winning movie Moscow Does Not Believe In Tears
Moscow Does Not Believe In Tears
Moscow Does not Believe in Tears is a 1980 Soviet film made by Mosfilm. It was written by Valentin Chernykh and directed by Vladimir Menshov. The leading roles were played by Menshov's wife Vera Alentova and by Aleksey Batalov. The film won an Academy Award for Best Foreign Language Film in...
.

On April 10, 1976 Shulzhenko performed to enraptured audience in the Column Hall of the House of Unions  in what would become her most famous concert.