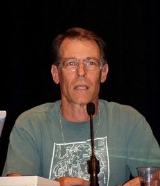 Overview
Kim Stanley Robinson is an American science fiction writer known for his award-winning Mars trilogy
Mars trilogy
The Mars trilogy is a series of award-winning science fiction novels by Kim Stanley Robinson that chronicles the settlement and terraforming of the planet Mars through the intensely personal and detailed viewpoints of a wide variety of characters spanning almost two centuries...
. His work delves into ecological and sociological themes regularly, and many of his novels appear to be the direct result of his own scientific fascinations, such as the fifteen years of research and lifelong fascination with the planet Mars
Mars
Mars is the fourth planet from the Sun in the Solar System. The planet is named after the Roman god of war, Mars. It is often described as the "Red Planet", as the iron oxide prevalent on its surface gives it a reddish appearance...
.

The only part of an argument that really matters is what we think of the people arguing. X claims a, Y claims b. They make arguments to support their claims with any number of points. But when their listeners remember the discussion, what matters is simply that X believes a and Y believes b. People then form their judgment on what they think of X and Y.

Science was many things, Nadia thought, including a weapon with which to hit other scientists.

They were so ignorant! Young men and women, educated very carefully to be apolitical, to be technicians who thought they disliked politics, making them putty in the hands of their rulers, just like always. It was appalling how stupid they were, really, and he could not help lashing into them.

Historical analogy is the last refuge of people who can't grasp the current situation.

You can't get any movement larger than five people without including at least one fucking idiot.

It was not power that corrupted people, but fools who corrupted power.