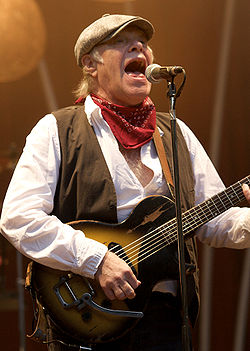 Kim Melius Flyvholm Larsen (born October 23, 1945 in Copenhagen
Copenhagen
Copenhagen is the capital and largest city of Denmark, with an urban population of 1,199,224 and a metropolitan population of 1,930,260 . With the completion of the transnational Øresund Bridge in 2000, Copenhagen has become the centre of the increasingly integrating Øresund Region...
) is a Danish rock music
Rock music
Rock music is a genre of popular music that developed during and after the 1960s, particularly in the United Kingdom and the United States. It has its roots in 1940s and 1950s rock and roll, itself heavily influenced by rhythm and blues and country music...
ian.

Inspired by The Beatles
The Beatles
The Beatles were an English rock band, active throughout the 1960s and one of the most commercially successful and critically acclaimed acts in the history of popular music. Formed in Liverpool, by 1962 the group consisted of John Lennon , Paul McCartney , George Harrison and Ringo Starr...
and rock and roll
Rock and roll
Rock and roll is a genre of popular music that originated and evolved in the United States during the late 1940s and early 1950s, primarily from a combination of African American blues, country, jazz, and gospel music...
, Larsen began as a songwriter and guitarist
Guitarist
A guitarist is a musician who plays the guitar. Guitarists may play a variety of instruments such as classical guitars, acoustic guitars, electric guitars, and bass guitars. Some guitarists accompany themselves on the guitar while singing.- Versatility :The guitarist controls an extremely...
. In 1969 he met Franz Beckerlee and Wili Jønsson
Wili Jønsson
Wili Jønsson is a Danish rock musician and member of 1970s band Gasolin'.Born 27 March 1942. Went to the Gerbrandsskolen together with Franz Beckerlee. In 1969 Jønsson got together with childhood friend Franz Beckerlee...
, and the three founded Gasolin'
Gasolin'
Gasolin was a Danish rock band from Christianshavn in Copenhagen formed by Kim Larsen, Franz Beckerlee and Wili Jønsson in 1969. Their first drummer was the late Bjørn Uglebjerg. He was replaced by Søren Berlev in 1971...
which, later joined by drummer Søren Berlev, became one of the most successful Danish rock bands. The band dissolved in the late 1970s and has always refused to reform although they remain very popular decades after their seventies
1970s
File:1970s decade montage.png|From left, clockwise: US President Richard Nixon doing the V for Victory sign after his resignation from office after the Watergate scandal in 1974; Refugees aboard a US naval boat after the Fall of Saigon, leading to the end of the Vietnam War in 1975; The 1973 oil...
heyday, which has contributed to their myth and magic. In 2006, the documentary movie Gasolin directed by Anders Østergaard, gave the history of the band and became a big hit in Denmark.

Kim Larsen released a number of solo albums in the eighties
1980s
File:1980s decade montage.png|thumb|400px|From left, clockwise: The first Space Shuttle, Columbia, lifted off in 1981; American President Ronald Reagan and Soviet leader Mikhail Gorbachev eased tensions between the two superpowers, leading to the end of the Cold War; The Fall of the Berlin Wall in...
, topping in 1983 with the album Midt om natten (In the Middle of the Night), which became the most sold Danish music album in history, with more than 532,000 copies sold. In 1986, he founded the band Kim Larsen & Bellami and released four albums until 1992, when the band broke up. He then released another solo album, Hvem kan sige nej til en engel (Who Can Say No To An Angel). In 1995, Larsen moved to Odense
Odense
The city of Odense is the third largest city in Denmark.Odense City has a population of 167,615 and is the main city of the island of Funen...
, the main city of the island of Funen
Funen
Funen , with a size of 2,984 km² , is the third-largest island of Denmark following Zealand and Vendsyssel-Thy, and the 163rd largest island of the world. Funen is located in the central part of the country and has a population of 454,358 inhabitants . The main city is Odense, connected to the...
, and found new success with his new band, Kim Larsen & Kjukken and the Swedish producer Max Lorentz.

Kim Larsen has had a number of successful album releases throughout the 80s, 90s and 00s and is possibly the most successful artist in Danish popular music history. As a solo artist, Larsen has sold approximately 3 million records, a remarkable feat considering Denmark's total population of approximately 5.4 million people (as of 2005). In the 2000s Larsen remains a top concert draw and continues to be very popular in Denmark and elsewhere in Scandinavia.

Larsen has many times voiced his opposition to the established society and instead advocated the right to be different from the mainstream: The album and movie Midt om natten revolves around this subject as does the album 231045-0637
231045-0637
231045-0637 is a rock album released in 1979 by Kim Larsen, a Danish rock musician.While Kim Larsen was a member of Gasolin' he released three solo albums, Værsgo, Kim Larsen og Yankee drengene and Starfuckers: Vogt dem for efterligninger...
. The title for this last album is Kim Larsens social security number which is strictly personal. Larsen was against the big database of every citizen, implied by this title.

As a heavy smoker, he paid in August 2008 an advertising campaign which showed the text "Tillykke med rygeforbudet - Gesundheit macht frei !!!". The first sentence means "Congratulations on the smoking ban" in Danish, the second sentence means "health makes free" in German. Disregarding the fact that smoking bans are not made to protect smokers, but non-smokers, Kim Larsen tried to construct a connection between smoking bans and such Nazi
Nazism
Nazism, the common short form name of National Socialism was the ideology and practice of the Nazi Party and of Nazi Germany...
phrases as Arbeit macht frei
Arbeit macht frei
"'" is a German phrase, literally "work makes free," meaning "work sets you free" or "work liberates". The slogan is known for having been placed over the entrances to a number of Nazi concentration camps during the Holocaust, including most infamously Auschwitz I, where it was made by prisoners...
.