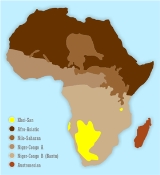 Overview
The Khoisan languages are the click languages of Africa which do not belong to other language families. They include languages indigenous to southern and eastern Africa
Africa
Africa is the world's second largest and second most populous continent, after Asia. At about 30.2 million km² including adjacent islands, it covers 6% of the Earth's total surface area and 20.4% of the total land area...
, though some, such as the Khoi languages, appear to have moved to their current locations not long before the Bantu expansion
Bantu expansion
The Bantu expansion or the Bantu Migration was a millennia-long series of migrations of speakers of the original proto-Bantu language group...
. In southern Africa their speakers are the Khoi
Khoi
Khoi may refer to:*The common name of Siamese Rough Bush, Streblus asper Lour*The Khoikhoi people*One of the Khoe languages*The Khoekhoe language*Khoy, a city in Iran*Khoy County, an administrative subdivision of Iran...
and Bushmen
Bushmen
The indigenous people of Southern Africa, whose territory spans most areas of South Africa, Zimbabwe, Lesotho, Mozambique, Swaziland, Botswana, Namibia, and Angola, are variously referred to as Bushmen, San, Sho, Barwa, Kung, or Khwe...
(Saan), in east Africa the Sandawe and Hadza.

Prior to the Bantu expansion, it is likely that Khoisan languages, or languages like them, were spread throughout southern and eastern Africa.

How do I write: "Delta Delta Five Zero" in Khoisan
More
x