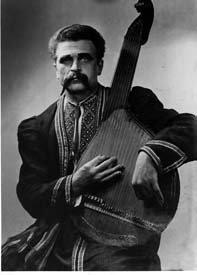 The manner in which the instrument is held also influences the technique used by the bandurist
Bandurist
A bandurist is a person who plays the Ukrainian plucked string instrument known as the bandura.-Types of performers:There are a number of different types of bandurist who differ in their paricular choice of instrument, the specific repertoire they play and manner in which they approach their...
. In some instances the left hand may use all five fingers in playing. The position in which the bandura is held also means that the 5th finger of the right hand can also be used with more dexterity than in the Kiev style.

The left hand has two positions for playing. The first position is such that the thumb is used to slide the hand along the edge of the instrument and allowing the remaining four fingers to pluck the strings and the second position is such that the left arm is thrown over the instrument (as shown in photograph of the bandurist) giving the hand access to all the strings so as to either complement or mirror the action of the right hand.

The fact that both hands have access to all of the strings means that both hands are able to pluck the same strings at a fraction of a second apart and thus produce complex tremolo
Tremolo
Tremolo, or tremolando, is a musical term that describes various trembling effects, falling roughly into two types. The first is a rapid reiteration...
s and other effects. It is not possible to create these effects on the Kiev style bandura and are not possible to be reproduced even when two Kiev style instruments are played simultaneously.
The source of this article is wikipedia, the free encyclopedia.  The text of this article is licensed under the GFDL.