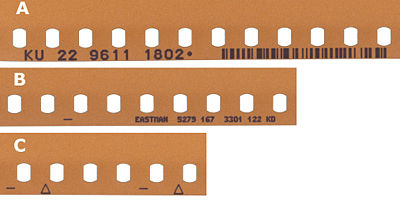 KeyKode is an Eastman Kodak Company advancement on edge numbers, which are letters, numbers and symbols placed at regular intervals along the edge of 35 mm and 16 mm film to allow for frame-by-frame specific identification. It was introduced in 1990.

KeyKode is a variation of time code
Time code
A timecode is a sequence of numeric codes generated at regular intervals by a timing system.- Video and film timecode :...
used in the post-production
Post-production
Post-production is part of filmmaking and the video production process. It occurs in the making of motion pictures, television programs, radio programs, advertising, audio recordings, photography, and digital art...
process which is designed to uniquely identify film frame
Film frame
In filmmaking, video production, animation, and related fields, a film frame or video frame is one of the many still images which compose the complete moving picture...
s in a film stock
Film stock
Film stock is photographic film on which filmmaking of motion pictures are shot and reproduced. The equivalent in television production is video tape.-1889–1899:...
.

Latent image exposes the edge of the film while it passes through the perforation machine. This method is primarily utilized for color negative films.

Visible ink is sometimes utilized to imprint on the edge of the film - again in manufacturing - at the time of perforations. The ink, which is not affected by photographic chemicals, is normally printed onto the base surface of the film. The numbers are visible on both the raw stock (unexposed) and processed (exposed and developed) film. This method is primarily utilized for black & white negative film.

The edge numbers serve a number of purposes. Every key frame is numbered with a multi-digit identifier that may be referred to later. In addition, a date of manufacturing is imprinted, then the type of emulsion and the batch number. This information is transferred from the negative (visible once developed) to the positive prints. The print may be edited and handled while the original negative remains safely untouched. When the film editing
Film editing
Film editing is part of the creative post-production process of filmmaking. It involves the selection and combining of shots into sequences, and ultimately creating a finished motion picture. It is an art of storytelling...
is complete, the edge numbers on the final cut film correspond back to their identical frames on the original negative so that a conform edit can be made of the original negative to match the work print.

Laboratories can also imprint their own edge numbers on the processed film negative or print to identify the film for their own means. This is normally done in yellow ink. A common workflow for film editing involves edge-coding printed film simultaneously with the film's synchronized audio track, on 35mm magnetic film, so that a foot of film and its synchronized audio have identical edge numbers.

With the popularity of telecine transfers and video edits, Kodak invented a machine readable edge number that could be recorded via computer, read by the editing computer and automatically produce a "cut list" from the video edit of the film.

To do this, Kodak utilized the USS-128 barcode
Barcode
A barcode is an optical machine-readable representation of data, which shows data about the object to which it attaches. Originally barcodes represented data by varying the widths and spacings of parallel lines, and may be referred to as linear or 1 dimensional . Later they evolved into rectangles,...
alongside the human-readable edge numbers. They also improved the quality and readability of the human-readable information to make it easier to identify. The Keykode consists of 12 characters in human-readable form followed by the same information in barcode form. Keykode is a form of metadata identifier for film negatives.