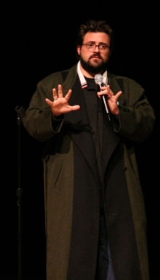 Guy from audience: Your wife is your beard!Kevin: My wife is my beard isn't she?... Oh, sir, who was it? It was you? That was your move. 'Cause in your head you're going "I'm gonna yell out your wife is your beard and they'll laugh like they laughed at the rock guy!" And you yelled it out, you got it out there, you had the guts to do it and shit, and then I even echoed it for you just in case the cheap seats didn't hear it, and there was fucking crickets, sir.

What happened to Riggs?

On what has happened to Mel Gibson

In Hollywood, you just kind of fail upwards.

On Jon Peters becoming a producer

There would always be a bunch of fucking grousers and nay-sayers being like "that was uncalled for."

On public reaction to George W. Bush calling a news conference and subsequently pulling Osama Bin Laden's head out of a brown paper bag. - SModcast 14:On Guard for Thee

On what a chicken is likely to say to another chicken were you to successfully hide a microphone in a chicken coop - SModcast 10: Eating a Chicken's Soul