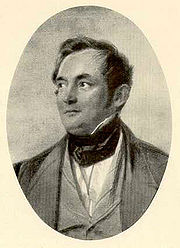 Carl Adolph von Basedow (March 28, 1799 – April 11, 1854) was a German
Germany
Germany , officially the Federal Republic of Germany , is a federal parliamentary republic in Europe. The country consists of 16 states while the capital and largest city is Berlin. Germany covers an area of 357,021 km2 and has a largely temperate seasonal climate...
physician
Physician
A physician is a health care provider who practices the profession of medicine, which is concerned with promoting, maintaining or restoring human health through the study, diagnosis, and treatment of disease, injury and other physical and mental impairments...
most famous for reporting the symptoms of what could later be dubbed Graves-Basedow disease
Graves-Basedow disease
Graves' disease is an autoimmune disease where the thyroid is overactive, producing an excessive amount of thyroid hormones...
, now technically known as exophthalmic goiter.

Basedow was born in Dessau
Dessau
Dessau is a town in Germany on the junction of the rivers Mulde and Elbe, in the Bundesland of Saxony-Anhalt. Since 1 July 2007, it is part of the merged town Dessau-Roßlau. Population of Dessau proper: 77,973 .-Geography:...
, Germany. He graduated from Halle University. He subsequently began general practice in Merseburg
Merseburg
Merseburg is a town in the south of the German state of Saxony-Anhalt on the river Saale, approx. 14 km south of Halle . It is the capital of the Saalekreis district. It had a diocese founded by Archbishop Adalbert of Magdeburg....
in 1822. He married early and became the town's chief medical officer, a position he would hold for the rest of his life. In 1840, Basedow reported on the conditions of what is now called Graves-Basedow disease. He died in Merseburg in 1854 after contracting spotted fever
Spotted fever
A spotted fever is a type of tick-borne disease which presents on the skin.Types include:* Mediterranean spotted fever* Rocky Mountain spotted fever* Queensland tick typhus...
from a corpse he was dissecting
Dissection
Dissection is usually the process of disassembling and observing something to determine its internal structure and as an aid to discerning the functions and relationships of its components....
.

Basedow has three eponymous medical conditions: Basedow's coma, a thyreotoxic coma
Coma
In medicine, a coma is a state of unconsciousness, lasting more than 6 hours in which a person cannot be awakened, fails to respond normally to painful stimuli, light or sound, lacks a normal sleep-wake cycle and does not initiate voluntary actions. A person in a state of coma is described as...
; Basedow's ocular syndromes, the unilateral retraction of the upper lid in Basedow’s syndrome; and, Graves-Basedow disease, a disorder characterized by the "Merseburger triad": tachycardia
Tachycardia
Tachycardia comes from the Greek words tachys and kardia . Tachycardia typically refers to a heart rate that exceeds the normal range for a resting heart rate...
, goitre
Goitre
A goitre or goiter , is a swelling in the thyroid gland, which can lead to a swelling of the neck or larynx...
, and exophthalmos
Exophthalmos
Exophthalmos is a bulging of the eye anteriorly out of the orbit. Exophthalmos can be either bilateral or unilateral . Measurement of the degree of exophthalmos is performed using an exophthalmometer...
. The term "Basedow’s disease" was suggested by Georg Hirsch in his Klinische Fragmente.
The source of this article is wikipedia, the free encyclopedia.  The text of this article is licensed under the GFDL.