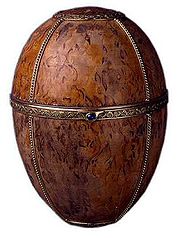 The egg is made out of Karelia
Karelia
Karelia , the land of the Karelian peoples, is an area in Northern Europe of historical significance for Finland, Russia, and Sweden...
n birch
Birch
Birch is a tree or shrub of the genus Betula , in the family Betulaceae, closely related to the beech/oak family, Fagaceae. The Betula genus contains 30–60 known taxa...
panels set in a gold frame. This is a departure in design from previous eggs, which were far more ornate and gilded. The change was due to austerity measures taken as a result of World War I
World War I
World War I , which was predominantly called the World War or the Great War from its occurrence until 1939, and the First World War or World War I thereafter, was a major war centred in Europe that began on 28 July 1914 and lasted until 11 November 1918...
, both by the Russian Imperial family, and the House of Fabergé. A number of the Fabergé Imperial Easter eggs created during the war (those ordered by the Tsar as Easter gifts for members of the Russian Imperial family, as opposed to other eggs produced by Fabergé), utilized unusual and less costly materials. However, the Karelian Birch egg was the only one to use an organic substance (wood) as a primary construction element. Its "surprise" was a miniature mechanical elephant, covered with tiny rose-cut diamonds, wound with a small jewel-encrusted key.

The Birch Egg was created in 1917, and was due to be completed and delivered to the Tsar that Easter
Easter
Easter is the central feast in the Christian liturgical year. According to the Canonical gospels, Jesus rose from the dead on the third day after his crucifixion. His resurrection is celebrated on Easter Day or Easter Sunday...
, as a present for his mother, the Empress Maria Feodorovna. Before the egg was delivered however, the February Revolution
February Revolution
The February Revolution of 1917 was the first of two revolutions in Russia in 1917. Centered around the then capital Petrograd in March . Its immediate result was the abdication of Tsar Nicholas II, the end of the Romanov dynasty, and the end of the Russian Empire...
took place and Nicholas II was forced to abdicate on March 15. On April 25, Fabergé sent the Tsar an invoice for the egg, addressing Nicholas II not as "Tsar of all the Russias" but as "Mr. Romanov, Nikolai Aleksandrovich". Nicholas paid 12,500 rubles and the egg was sent to Grand Duke Michael Alexandrovich
Grand Duke Michael Alexandrovich of Russia
Grand Duke Michael Alexandrovich of Russia was the youngest son of Emperor Alexander III of Russia.At the time of his birth, his paternal grandfather was still the reigning Emperor of All the Russias. Michael was fourth-in-line to the throne following his father and elder brothers Nicholas and...
at his palace, for presentation to the Empress, but the Duke fled before it arrived. The egg remained in the palace until it was looted in the wake of the October Revolution
October Revolution
The October Revolution , also known as the Great October Socialist Revolution , Red October, the October Uprising or the Bolshevik Revolution, was a political revolution and a part of the Russian Revolution of 1917...
later that year.

After the October Revolution the egg was acquired by the Rumyantsev Museum
Rumyantsev Museum
The Rumyantsev Museum was Moscow's first public museum. It evolved from the personal art collection and library of Count Nikolay Rumyantsev , the last of his family.- History :...
in Moscow. It disappeared once again after the museum closed in January 1927 and was presumed lost. In 1999 Fabergé's great-granddaughter Tatiana published drawings of the designs for the Birch and Constellation Eggs, but it was assumed that they were both incomplete. The Birch Egg publicly reappeared in 2001 when a private collector from the United Kingdom
United Kingdom
The United Kingdom of Great Britain and Northern IrelandIn the United Kingdom and Dependencies, other languages have been officially recognised as legitimate autochthonous languages under the European Charter for Regional or Minority Languages...
, the descendant of Russian emigrants, sold it to Alexander Ivanov
Alexander Ivanov
Alexander Ivanov may refer to:*Alexander Ivanov , Russian art collector, art dealer and businessman*Alexander Ivanov , Russian amateur Olympic wrestler*Alexander Ivanov , Russian boxer...
, the Moscow collector who owns the Faberge Museum
Fabergé Museum
Fabergé Museum was opened in by Russian art collector Alexander Ivanov in the German spa city of Baden-Baden.-Description:The most significant item in the museum's collection is the Rothschild Fabergé egg, that was made as an engagement gift from Béatrice Ephrussi de Rothschild to her brother's...
in Baden Baden. The complete purchase, which cost the museum "millions of dollars", consisted of the egg itself, the case, the wind-up key for the surprise, Fabergé's original invoice to Nicholas II, and a letter from Fabergé to Alexander Kerensky
Alexander Kerensky
Alexander Fyodorovich Kerensky was a major political leader before and during the Russian Revolutions of 1917.Kerensky served as the second Prime Minister of the Russian Provisional Government until Vladimir Lenin was elected by the All-Russian Congress of Soviets following the October Revolution...
complaining about not being paid and asking that the egg be delivered. The "surprise" itself was not in the collector's possession and was likely stolen by soldiers during the October Revolution.
The source of this article is wikipedia, the free encyclopedia.  The text of this article is licensed under the GFDL.