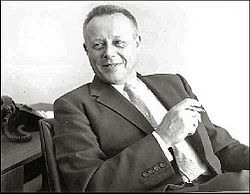 Karel Jan Bossart was a pioneering rocket designer and creator of the Atlas ICBM. His achievements rank alongside those of Wernher von Braun
Wernher von Braun
Wernher Magnus Maximilian, Freiherr von Braun was a German rocket scientist, aerospace engineer, space architect, and one of the leading figures in the development of rocket technology in Nazi Germany during World War II and in the United States after that.A former member of the Nazi party,...
and Sergei Korolev but as most of his work was for the United States Air Force and therefore was classified he remains relatively little known.

After winning a scholarship - under the Belgian American Education Foundation - to M.I.T. to study aeronautical engineering he remained in the US working for various aircraft companies. In 1945 he was chief of structures at Convair
Convair
Convair was an American aircraft manufacturing company which later expanded into rockets and spacecraft. The company was formed in 1943 by the merger of Vultee Aircraft and Consolidated Aircraft, and went on to produce a number of pioneering aircraft, such as the Convair B-36 bomber, and the F-102...
and proposed to the USAF that a missile could be developed with an 8000km range based on the work of von Braun. The Air Force was skeptical of Bossart's proposal partly to preserve the priority of Strategic Bombers but he was granted a limited contract to develop the proposal. Bossart's major innovation was the use of a monocoque
Monocoque
Monocoque is a construction technique that supports structural load by using an object's external skin, as opposed to using an internal frame or truss that is then covered with a non-load-bearing skin or coachwork...
design in which structural support was maintained by pressure within the inelastic fuel tanks. After a series of tests in 1947 the Air Force lost interest and Bossart was instructed to abandon the research but by 1951 the escalation of the cold war enabled Bossart to revive the project that became known as 'Atlas'. In 1955 the CIA reported that the Soviets had swiftly progressed their own ICBM programme and Atlas became a crash project of the highest national importance. Bossart used this opportunity to advance work with high energy cryogenic fuels that resulted in the Centaur
Centaur (rocket stage)
Centaur is a rocket stage designed for use as the upper stage of space launch vehicles. Centaur boosts its satellite payload to geosynchronous orbit or, in the case of an interplanetary space probe, to or near to escape velocity...
upper stage.

Atlas was first launched in 1958 but was never fully effective as an ICBM. As a launch vehicle it has formed the basis of the most successful and reliable expendable rockets in service. As a result Bossart's achievements include:


In 1955 Bossart became chief engineer of the Atlas project and in 1957 he was promoted to Technical Director of Aeronautics at General Dynamics. On December 17, 1957, eleven years of Bossart's work was climaxed by the successful first flight of the Atlas. On December 22, 1957, he appeared on What's My Line?
What's My Line?
What's My Line? is a panel game show which originally ran in the United States on the CBS Television Network from 1950 to 1967, with several international versions and subsequent U.S. revivals. The game tasked celebrity panelists with questioning contestants in order to determine their occupations....
as a guest credited as "Rocket Designer U.S.A.F. Atlas Missile".

In 1958 he received the Air Force's Exceptional Civilian Award for his work in developing America's first ICBM.

His co-workers called Bossart one of the finest technical men in the country. They credit him with having spearheaded a major phase in the art of rocketry.