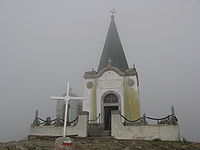 During World War I
World War I
World War I , which was predominantly called the World War or the Great War from its occurrence until 1939, and the First World War or World War I thereafter, was a major war centred in Europe that began on 28 July 1914 and lasted until 11 November 1918...
, in September 1916, the Battle of Kajmakcalan
Battle of Kajmakcalan
The Battle of Kajmakchalan was a battle of the Macedonian Front in World War I. The battle was part of the greater military World War I campaign between the Kingdom of Serbia, on the Allied Side, and the Kingdom of Bulgaria, on the Central Powers...
between Serbia
Serbia
Serbia , officially the Republic of Serbia , is a landlocked country located at the crossroads of Central and Southeast Europe, covering the southern part of the Carpathian basin and the central part of the Balkans...
n and Bulgaria
Bulgaria
Bulgaria , officially the Republic of Bulgaria , is a parliamentary democracy within a unitary constitutional republic in Southeast Europe. The country borders Romania to the north, Serbia and Macedonia to the west, Greece and Turkey to the south, as well as the Black Sea to the east...
n troops took place at Kajmakčalan and around the adjacent peaks, resulting in a Serbian victory. There is a small church and crypt for the Serbian soldiers who died in the battle. Near the top of the mountain, on the Greek side, there is a small church named Profitis Ilias .
The source of this article is wikipedia, the free encyclopedia.  The text of this article is licensed under the GFDL.