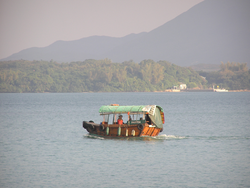 The kai-to is a type of small, motorized ferry
Ferry
A ferry is a form of transportation, usually a boat, but sometimes a ship, used to carry primarily passengers, and sometimes vehicles and cargo as well, across a body of water. Most ferries operate on regular, frequent, return services...
operating in Hong Kong
Hong Kong
Hong Kong is one of two Special Administrative Regions of the People's Republic of China , the other being Macau. A city-state situated on China's south coast and enclosed by the Pearl River Delta and South China Sea, it is renowned for its expansive skyline and deep natural harbour...
. They are usually used to serve remote coastal settlements in the territory's outlying islands
Outlying Islands, Hong Kong
In Hong Kong, the Outlying Islands are the groups of islands that surround Hong Kong Island as well as Kowloon and the New Territories on the mainland. There are 236 islands in Hong Kong, the majority of which are part of Islands District in the south and southwest, Sai Kung District in the...
.

There are currently 78 fixed kai-to routes, mostly used to ferry passengers between the outlying islands of Lantau Island
Lantau Island
Lantau Island , based on the old local name of Lantau Peak , is the largest island in Hong Kong, located at the mouth of the Pearl River. Administratively, most of Lantau Island is part of the Islands District of Hong Kong...
, Peng Chau
Peng Chau
Peng Chau is a small island located off the north-eastern coast of Lantau Island, Hong Kong, which has an area of 0.99 km².Peng Chau is known for its small island lifestyle, accessibility to fresh seafood, and several temples located around the island...
, Cheung Chau
Cheung Chau
Cheung Chau is a small island 10 km southwest of Hong Kong Island, is nicknamed as the 'dumbbell island' for its shape. It has been inhabited for longer than most other places in the territory of Hong Kong, with a population of about 23,000 up to 2006...
, Lamma Island
Lamma Island
Lamma Island , also known as Pok Liu Chau or simply Pok Liu , is the third largest island in Hong Kong. Administratively, it is part of the Islands District.-Name:...
, among others, to the west of Hong Kong, and to enclave villages in the Tolo Harbour
Tolo Harbour
Tolo Harbour , or Tai Po Hoi is a sheltered harbour in northeast New Territories of Hong Kong.-Geography:Tide Cove aka...
, Double Haven
Double Haven
Double Haven or Yan Chau Tong is a harbour hugged by Double Island, Crescent Island and Crooked Island with north-eastern New Territories of Hong Kong. Major parts of the haven falls within Yan Chau Tong Marine Park to protect the wildlife of the marine creatures. It is renowned for its scenery...
, Port Shelter
Port Shelter
Port Shelter, also known as Ngau Mei Hoi indigenously, is a harbour south of Sai Kung Peninsula in Hong Kong.-External links:*...
, etc. in eastern New Territories
New Territories
New Territories is one of the three main regions of Hong Kong, alongside Hong Kong Island and the Kowloon Peninsula. It makes up 86.2% of Hong Kong's territory. Historically, it is the region described in The Convention for the Extension of Hong Kong Territory...
.

Certain routes within Victoria Harbour
Victoria Harbour
Victoria Harbour is a natural landform harbour situated between Hong Kong Island and the Kowloon Peninsula in Hong Kong. The harbour's deep, sheltered waters and strategic location on the South China Sea were instrumental in Hong Kong's establishment as a British colony and its subsequent...
are still served by Kai-tos, including the Sai Wan Ho
Sai Wan Ho
Sai Wan Ho is a primarily residential area on the northeastern shore of Hong Kong Island, Hong Kong, between Quarry Bay and Shau Kei Wan. It is part of the Eastern District, and is administered together with surrounding areas under the Eastern District Council.-Location:Sai Wan Ho is conventionally...
to Kwun Tong
Kwun Tong
Kwun Tong is an area in Kwun Tong District, situated at the eastern part of the Kowloon Peninsula, and its boundary stretches from Lion Rock in the north to Lei Yue Mun in the south, and from the winding paths of Kowloon Peak in the east to the north coast of the former Kai Tak Airport runway in...
route.