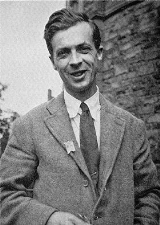 Sir Julian Sorell Huxley FRS (22 June 1887 – 14 February 1975) was an English evolutionary biologist, humanist and internationalist
Internationalism (politics)
Internationalism is a political movement which advocates a greater economic and political cooperation among nations for the theoretical benefit of all...
. He was a proponent of natural selection
Natural selection
Natural selection is the nonrandom process by which biologic traits become either more or less common in a population as a function of differential reproduction of their bearers. It is a key mechanism of evolution....
, and a leading figure in the mid-twentieth century evolutionary synthesis. He was Secretary of the Zoological Society of London
Zoological Society of London
The Zoological Society of London is a charity devoted to the worldwide conservation of animals and their habitats...
(1935–1942), the first Director of UNESCO
UNESCO
The United Nations Educational, Scientific and Cultural Organization is a specialized agency of the United Nations...
, and a founding member of the World Wildlife Fund.

Huxley was well-known for his presentation of science in books and articles, and on radio and television.

Some day no one will have to work more than two days a week... The human being can consume so much and no more. When we reach the point when the world produces all the goods that it needs in two days, as it inevitably will, we must curtail our production of goods and turn our attention to the great problem of what to do with our new leisure.

We all know how the size of sums of money appears to vary in a remarkable way according as they are being paid in or paid out.

In the evolutionary pattern of thought, there is neither need nor room for the supernatural. The earth was not created; it evolved. So did all the animals and plants that inhabit it, including our human selves, mind and soul as well as brain and body. So did religion.

If I am to be remembered, I hope it will not be primarily for my specialized scientific work, but as a generalist; one to whom, enlarging Terence's words, nothing human and nothing in external nature was alien.