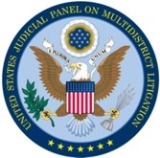 As of September 30, 2011, the Panel had consolidated over 390,000 lawsuits into over 1,450 multidistrict litigations. These dockets encompass litigation categories as diverse as securities fraud
Securities fraud
Securities fraud, also known as stock fraud and investment fraud, is a practice that induces investors to make purchase or sale decisions on the basis of false information, frequently resulting in losses, in violation of the securities laws....
, drugs and other products liability cases, intellectual property
Intellectual property
Intellectual property is a term referring to a number of distinct types of creations of the mind for which a set of exclusive rights are recognized—and the corresponding fields of law...
infringement, airplane crashes
Aviation accidents and incidents
An aviation accident is defined in the Convention on International Civil Aviation Annex 13 as an occurrence associated with the operation of an aircraft which takes place between the time any person boards the aircraft with the intention of flight and all such persons have disembarked, in which a...
and employment practices.


Current composition of the Panel

The following members comprise the panel: