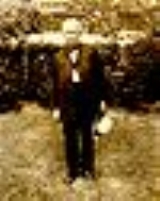 Joseph Sayers was born September 23, 1841 in Grenada, Mississippi
Grenada, Mississippi
Grenada is a city in Grenada County, Mississippi, United States. The population was 14,879 at the 2000 census. It is the county seat of Grenada County.-History:...
to Dr. David Sayer and his wife Mary Thomas {Peete}. His mother died in 1851, and soon after he moved to Texas
Texas
Texas is the second largest U.S. state by both area and population, and the largest state by area in the contiguous United States.The name, based on the Caddo word "Tejas" meaning "friends" or "allies", was applied by the Spanish to the Caddo themselves and to the region of their settlement in...
with his father and younger brother, William. The family settled in Bastrop
Bastrop, Texas
-Demographics:As of the census of 2000, there are 5340 people in Bastrop, organized into 2034 households and 1336 families. The population density is 734.8 people per square mile . There are 2,239 housing units at an average density of 308.1 per square mile...
, where Sayers and his brother attended the Bastrop Military Institute.

When the Civil War
American Civil War
The American Civil War was a civil war fought in the United States of America. In response to the election of Abraham Lincoln as President of the United States, 11 southern slave states declared their secession from the United States and formed the Confederate States of America ; the other 25...
broke out, Sayers joined the Confederate States Army
Confederate States Army
The Confederate States Army was the army of the Confederate States of America while the Confederacy existed during the American Civil War. On February 8, 1861, delegates from the seven Deep South states which had already declared their secession from the United States of America adopted the...
's 5th Texas Regiment, a cavalry unit led by General Tom Green
Thomas Green (general)
Thomas Green was a lawyer, politician, soldier and officer of the Republic of Texas, and rose to the rank of Brigadier General of the Confederacy during the American Civil War. Tom Green County, Texas was named after him....
. He participated in the Battle of Valverde
Battle of Valverde
The Battle of Valverde, or the Battle of Valverde Ford from February 20 to February 21, 1862, was fought near the town of Valverde at a ford of Valverde Creek in Confederate Arizona, in what is today the state of New Mexico. It was a major Confederate success in the New Mexico Campaign of the...
in New Mexico
New Mexico
New Mexico is a state located in the southwest and western regions of the United States. New Mexico is also usually considered one of the Mountain States. With a population density of 16 per square mile, New Mexico is the sixth-most sparsely inhabited U.S...
in February 1862, and was recommended for promotion for his bravery in capturing an artillery battery. Later that year he returned to Texas with his regiment before being sent to Louisiana
Louisiana
Louisiana is a state located in the southern region of the United States of America. Its capital is Baton Rouge and largest city is New Orleans. Louisiana is the only state in the U.S. with political subdivisions termed parishes, which are local governments equivalent to counties...
, where he was wounded in the battle of Camp Bisland in April 1863. His actions during that conflict led to his promotion to major, and he became Green's chief–of–staff. Sayers was wounded again in April 1864 at the Battle of Mansfield
Battle of Mansfield
The Battle of Mansfield, also known as the Battle of Sabine Crossroads, occurred on April 8, 1864, in De Soto Parish, Louisiana. Confederate forces commanded by Richard Taylor attacked a Union army commanded by Nathaniel Banks a few miles outside the town of Mansfield, near Sabine Crossroads...
. After Green died at the Battle of Blair's Landing
Battle of Blair's Landing
The Battle of Blair's Landing was fought on April 12, 1864, in Red River Parish, Louisiana, as a part of the Red River Campaign of the American Civil War.-Battle:...
, Sayers became the assistant adjutant to General Richard Taylor
Richard Taylor (general)
Richard Taylor was a Confederate general in the American Civil War. He was the son of United States President Zachary Taylor and First Lady Margaret Taylor.-Early life:...
.

After the war ended, Sayers returned to Texas. He opened a school and simultaneously studied law. He was admitted to the bar and then formed a partnership with G. "Wash" Jones.

Sayers entered political service in 1873, when he became a state senator in the 13th Texas Legislature. In his term, he helped reverse most of the legislation that had been passed under the Radical Republicans. After his term ended in 1875, Sayers spent three years as chairman of the Texas State Democratic Executive Committee. He presided over the state Democratic convention in both 1876 and 1878. At the 1878 convention he was nominated to be lieutenant governor
Lieutenant Governor of Texas
The Lieutenant Governor of Texas is the second-highest executive office in the government of Texas, a state in the U.S. It is the second most powerful post in Texas government because its occupant controls the work of the Texas Senate and controls the budgeting process as a leader of the...
under Oran M. Roberts
Oran M. Roberts
Oran Milo Roberts , was the 17th Governor of Texas from January 21, 1879 to January 16, 1883. He was a member of the Democratic Party. Roberts County, Texas, is named after him....
and later won the election. Sayers and Roberts differed on one key point; Sayers believed that public lands should be saved for homesteaders and schools, not sold cheaply to speculators, as Roberts advocated.

In 1884, Sayers was elected to U.S. Congress, where he served until 1898. That year, he ran for governor, winning the election and taking office in early 1899. During his term in office, labor unions were exempted from antitrust laws, and blacklists were outlawed. His term saw increased spending on education, prisons, and social service institutions and outlawed railroad rebates. He also spearheaded legislation that authorized the creation of school districts.

Sayers's term was notable for the number of disasters that the state faced. The Brazos River
Brazos River
The Brazos River, called the Rio de los Brazos de Dios by early Spanish explorers , is the longest river in Texas and the 11th longest river in the United States at from its source at the head of Blackwater Draw, Curry County, New Mexico to its mouth at the Gulf of Mexico with a drainage...
flooded in 1899, and the following year the Galveston Hurricane of 1900
Galveston Hurricane of 1900
The Hurricane of 1900 made landfall on the city of Galveston in the U.S. state of Texas, on September 8, 1900.It had estimated winds of at landfall, making it a Category 4 storm on the Saffir-Simpson Hurricane Scale...
caused great devastation. Other parts of the state suffered from a severe drought, and boll weevil
Boll weevil
The boll weevil is a beetle measuring an average length of six millimeters, which feeds on cotton buds and flowers. Thought to be native to Central America, it migrated into the United States from Mexico in the late 19th century and had infested all U.S. cotton-growing areas by the 1920s,...
s caused widespread cotton destruction. Millions of dollars in assistance came to the state, and Sayers administered the distribution of the funds "honestly and fairly."