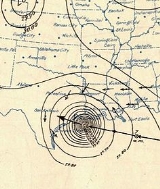 Overview
The Hurricane of 1900 made landfall
Landfall (meteorology)
Landfall is the event of a tropical cyclone or a waterspout coming onto land after being over water. When a waterspout makes landfall it is reclassified as a tornado, which can then cause damage inland...
on the city of Galveston
Galveston, Texas
Galveston is a coastal city located on Galveston Island in the U.S. state of Texas. , the city had a total population of 47,743 within an area of...
in the U.S. state of Texas
Texas
Texas is the second largest U.S. state by both area and population, and the largest state by area in the contiguous United States.The name, based on the Caddo word "Tejas" meaning "friends" or "allies", was applied by the Spanish to the Caddo themselves and to the region of their settlement in...
, on September 8, 1900.
It had estimated winds of 145 miles per hour (233.4 km/h) at landfall, making it a Category 4 storm on the Saffir-Simpson Hurricane Scale
Saffir-Simpson Hurricane Scale
The Saffir–Simpson Hurricane Scale , or the Saffir–Simpson Hurricane Wind Scale , classifies hurricanes — Western Hemisphere tropical cyclones that exceed the intensities of tropical depressions and tropical storms — into five categories distinguished by the intensities of their sustained winds...
. It was the deadliest hurricane in US history, and the second costliest hurricane in US history based on the US dollar's 2005 value (to compare costs with those of Hurricane Katrina and others).

What was the name of the Church that was still standing after the hurricane of 1900?