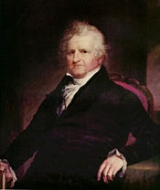 Encyclopedia
Joseph Bradley Varnum was a U.S.
United States
The United States of America is a federal constitutional republic comprising fifty states and a federal district...
politician of the Democratic-Republican Party from Massachusetts
Massachusetts
The Commonwealth of Massachusetts is a state in the New England region of the northeastern United States of America. It is bordered by Rhode Island and Connecticut to the south, New York to the west, and Vermont and New Hampshire to the north; at its east lies the Atlantic Ocean. As of the 2010...
.

In the 1786 US Constitution there was a provision in Article I – the part of the document dealing with the duties of the legislative branch:

Section 9. The migration or importation of such persons as any of the states now existing shall think proper to admit, shall not be prohibited by the Congress prior to the year one thousand eight hundred and eight, but a tax or duty may be imposed on such importation, not exceeding ten dollars for each person.

In other words, the government could not ban the importation of slaves for 20 years after the adoption of the Constitution. And as the designated year 1808 approached, those opposed to slavery began making plans for legislation that would outlaw the trans-Atlantic slave trade.

On March 3, 1805, Congressman Joseph Bradley Varnum [1751-1821], Dracut, MA [now Lowell] submitted the follow Massachusetts Proposition to amend the Constitution and Abolish the Slave Trade. This proposition was table until 1807, when under Joseph Bradley Varnum leadership the amendment moved through Congress and passed both houses on March 2, 1807. Slave owner and President Thomas Jefferson signed it into law on March 3, 1807. Due to the restriction imposed by Article I, Section of the Constitution, the law did not become effective until January 1, 1808.

Congressman Joseph Bradley Varnum, one of the members for the State of Massachusetts, presented to the House a letter from the Governor of the said State, enclosing an attested copy of two concurrent resolutions of the Senate and House of Representatives of the State of Massachusetts, passed the fifteenth of February, in the present year, "instructing the Senators, and requesting the Representatives in Congress, from the said State, to take all legal and necessary steps, to use their utmost exertions, as soon as the same is practicable, to obtain an amendment to the Federal Constitution, so as to authorize and empower the Congress of the United States to pass a law, whenever they may deem it expedient, to prevent the further importation of slaves from any of the West India Islands, from the coast of Africa, or elsewhere, into the United States, or any part thereof:" Whereupon,

A motion was made and seconded that the House do come to the following resolution:

Resolved by the Senate and House of Representatives of the United States of America in Congress assembled, two-thirds of both Houses concurring, That the following article be proposed to the Legislatures of the several States, as an amendment to the Constitution of the United States, which, when ratified by three-fourths of the said Legislatures, shall be valid to all intents and purposes, as a part of the said Constitution, to wit: