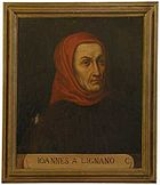 Encyclopedia
John of Legnano was an Italian jurist, a canon lawyer at the University of Bologna
University of Bologna
The Alma Mater Studiorum - University of Bologna is the oldest continually operating university in the world, the word 'universitas' being first used by this institution at its foundation. The true date of its founding is uncertain, but believed by most accounts to have been 1088...
and the most prominent defender of Urban VI at the outbreak of the Western Schism
Western Schism
The Western Schism or Papal Schism was a split within the Catholic Church from 1378 to 1417. Two men simultaneously claimed to be the true pope. Driven by politics rather than any theological disagreement, the schism was ended by the Council of Constance . The simultaneous claims to the papal chair...
.

He was a doctor utriusque iuris, in both civil and canon law, teaching at Bologna
Bologna
Bologna is the capital city of Emilia-Romagna, in the Po Valley of Northern Italy. The city lies between the Po River and the Apennine Mountains, more specifically, between the Reno River and the Savena River. Bologna is a lively and cosmopolitan Italian college city, with spectacular history,...
by 1351. "According to tradition, he was schooled at the University of Bologna in liberal arts, astrology, philosophy and medicine before taking his degrees in law", John P. McCall reports, suggesting that some of his backing at Bologna may have come from the Visconti of Milan
House of Visconti
Visconti is the family name of two important Italian noble dynasties of the Middle Ages. There are two distinct Visconti families: The first one in the Republic of Pisa in the mid twelfth century who achieved prominence first in Pisa, then in Sardinia where they became rulers of Gallura...
, who extended their control to the south in 1350. Soon he became the loyal friend of two popes in succession — Urban V
Pope Urban V
Pope Urban V , born Guillaume Grimoard, was Pope from 1362 to 1370.-Biography:Grimoard was a native of Grizac in Languedoc . He became a Benedictine and a doctor in Canon Law, teaching at Montpellier and Avignon...
, from whom he received grants and gifts, and Gregory XI
Pope Gregory XI
Gregory XI was pope from 1370 until his death.-Biography:He was born Pierre Roger de Beaufort, in Maumont, in the modern commune of Rosiers-d'Égletons, Limousin around 1336. He succeeded Pope Urban V in 1370, and was pope until 1378...
, for whom he drew up the deed of purchase for the Pontifical Gregorian University
Pontifical Gregorian University
The Pontifical Gregorian University is a pontifical university located in Rome, Italy.Heir of the Roman College founded by Saint Ignatius of Loyola over 460 years ago, the Gregorian University was the first university founded by the Jesuits...
— and the most prominent defender of a third, the irascible and embattled Urban VI
Pope Urban VI
Pope Urban VI , born Bartolomeo Prignano, was Pope from 1378 to 1389.-Biography:Born in Itri, he was a devout monk and learned casuist, trained at Avignon. On March 21, 1364, he was consecrated Archbishop of Acerenza in the Kingdom of Naples...
. Urban had multiple copies of John's defense of his election, De fletu ecclesiæ distributed in the opening maneuvers of the Western Schism
Western Schism
The Western Schism or Papal Schism was a split within the Catholic Church from 1378 to 1417. Two men simultaneously claimed to be the true pope. Driven by politics rather than any theological disagreement, the schism was ended by the Council of Constance . The simultaneous claims to the papal chair...
, including one sent to the University of Paris
University of Paris
The University of Paris was a university located in Paris, France and one of the earliest to be established in Europe. It was founded in the mid 12th century, and officially recognized as a university probably between 1160 and 1250...
, and he offered him the cardinal's hat, which John cautiously refused, being married, for one thing.

His works include De Bello, a work on war and duelling prefaced by an astrological-political allegory and dedicated to Cardinal Albornoz, papal legate who took control of Bologna in 1360, often cited as an early source in international law
International law
Public international law concerns the structure and conduct of sovereign states; analogous entities, such as the Holy See; and intergovernmental organizations. To a lesser degree, international law also may affect multinational corporations and individuals, an impact increasingly evolving beyond...
; De Pace (1364) on the virtues and vices and De pluritalite beneficiorum (1365), both works dedicated to Urban V; for Gregory XI he prepared his Somnium (1372) on civil and canon law, in which he revealed himself as a compiler and synthesizerand De Iuribus ecclesiæ in civitatem Bononiæ (1376), surveying the law of Bologna, among others; a Commentaria in Decretales commentary on the Decretals; and De adventu Christi (1375). He is alluded to in Chaucer’s Canterbury Tales.

He died at the height of his fame. In his will he provided an endowment for poor students from Milan at the University of Bologna and bequeathed his house to the University if his male heirs should die out. His pupil Cosimo de' Migliorati was elected pope as Innocent VII
Pope Innocent VII
Pope Innocent VII , born Cosimo de' Migliorati, was briefly Pope at Rome, from 1404 to his death, during the Western Schism while there was a rival Pope, antipope Benedict XIII , at Avignon.Migliorati was born to a simple family of Sulmona in the Abruzzi...
.
The source of this article is wikipedia, the free encyclopedia.  The text of this article is licensed under the GFDL.