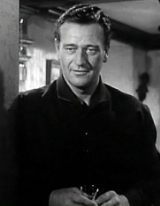 Overview
Marion Mitchell Morrison (born Marion Robert Morrison; May 26, 1907 – June 11, 1979), better known by his stage name John Wayne, was an American film actor, director and producer. He epitomized rugged masculinity and became an enduring American icon. He is famous for his distinctive calm voice, walk, and height. He was also known for his conservative
American conservatism
Conservatism in the United States has played an important role in American politics since the 1950s. Historian Gregory Schneider identifies several constants in American conservatism: respect for tradition, support of republicanism, preservation of "the rule of law and the Christian religion", and...
political views and his support, beginning in the 1950s, for anti-communist positions.

John Wayne is also the biggest box office draw of all time appearing within the Quigley annual list of "Top 10 Money Maker's Poll" a record 25 times, with the exception of 1958 he was on this list every year from 1949 to 1974.

A Harris Poll
Harris Interactive
Harris Interactive , headquartered in New York, New York, is a custom market research firm, known for the Harris Poll. Harris works in a wide range of industries...
, released January 2011, placed Wayne third among America's favorite film stars, the only deceased star to ever appear on the list and the only one who has appeared on the poll every year since it first began in 1994.

In June 1999, the American Film Institute
American Film Institute
The American Film Institute is an independent non-profit organization created by the National Endowment for the Arts, which was established in 1967 when President Lyndon B. Johnson signed the National Foundation on the Arts and the Humanities Act...
named Wayne 13th among the Greatest Male Screen Legends of All Time.
Wayne was born Marion Robert Morrison at 216 South Second Street in Winterset, Iowa
Winterset, Iowa
Winterset is a city in Madison County, Iowa, United States. The population was 4,768 at the 2000 census. It is the county seat of Madison County....
.

I was wondering if the Duke ever had any bodyguards and if so does anyone know where or how I might find out who they were ?