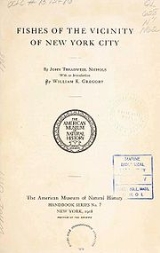 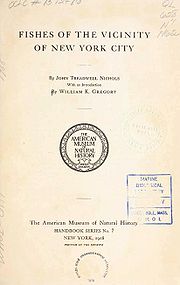 Nichols was born as son of John White Treadwell Nichols in Jamaica Plain, Boston, Massachusetts
Massachusetts
The Commonwealth of Massachusetts is a state in the New England region of the northeastern United States of America. It is bordered by Rhode Island and Connecticut to the south, New York to the west, and Vermont and New Hampshire to the north; at its east lies the Atlantic Ocean. As of the 2010...
. In 1906 he studied vertebrate zoology at Harvard College where he graduated to Bachelor of Arts
Bachelor of Arts
A Bachelor of Arts , from the Latin artium baccalaureus, is a bachelor's degree awarded for an undergraduate course or program in either the liberal arts, the sciences, or both...
(AB). In 1907 he joined the American Museum of Natural History as assistant in the department of mammalogy. In 1913 he founded Copeia
Copeia
Copeia is a quarterly peer-reviewed scientific journal covering research in ichthyology and herpetology that was named after Edward Drinker Cope, a prominent American researcher in these fields. It is the official journal of the American Society of Ichthyologists and Herpetologists...
the official journal of the American Society of Ichthyologists and Herpetologists
American Society of Ichthyologists and Herpetologists
The American Society of Ichthyologists and Herpetologists is an international organization devoted to the scientific studies of ichthyology and herpetology...
. In 1916 he described the long lost Bermuda Petrel
Bermuda Petrel
The Bermuda Petrel, Pterodroma cahow, is a gadfly petrel. Commonly known in Bermuda as the Cahow, a name derived from its eerie cries, this nocturnal ground-nesting seabird is the national bird of Bermuda, and a symbol of hope for nature conservation. It was thought extinct for 330 years...
together with Louis Leon Arthur Mowbray
Louis L. Mowbray
Louis Leon Arthur Mowbray was a Bermudian naturalist.-Life:Mowbray was the only son of schoolteacher William Mowbray and his wife Mary Ann Brown. His father emigrated from Luisiana to Bermuda Island in 1870...
who first sighted this bird within a flock of other petrels in 1906 on Castle Island, Bermuda 45 years before it was officially rediscovered by Mowbray's son Louis. He also described the fish genus Bajacalifornia
Bajacalifornia
Bajacalifornia is a fish genus from the family Alepocephalidae. It was described in 1925 by Charles Haskins Townsend and John Treadwell Nichols on the basis of Bajacalifornia burragei which was discovered in 1911 during the deep sea expedition of the research vessel USS Albatross off the coast of...
. He also worked with a team of scientists from the American Museum of Natural History during the Jersey Shore shark attacks of 1916
Jersey Shore Shark Attacks of 1916
The Jersey Shore shark attacks of 1916 were a series of shark attacks along the coast of New Jersey between July 1 and July 12, 1916, in which four people were killed and one injured. Since 1916, scholars have debated which shark species was responsible and the number of animals involved, with the...
. From 1913 to 1952 he was first assistant curator, then associate curator in charge and finally curator in the Department of Ichthyology at the American Museum of Natural History.

Nichols wrote 1,000 articles and several books (mostly about fish but also about birds) and he made many expeditions around the world.

He died in Garden City
Garden City, New York
Garden City is a village in the town of Hempstead in central Nassau County, New York, in the United States. It was founded by multi-millionaire Alexander Turney Stewart in 1869, and is located on Long Island, to the east of New York City, from mid-town Manhattan, and just south of the town of...
, Long Island
Long Island
Long Island is an island located in the southeast part of the U.S. state of New York, just east of Manhattan. Stretching northeast into the Atlantic Ocean, Long Island contains four counties, two of which are boroughs of New York City , and two of which are mainly suburban...
, New York
New York
New York is a state in the Northeastern region of the United States. It is the nation's third most populous state. New York is bordered by New Jersey and Pennsylvania to the south, and by Connecticut, Massachusetts and Vermont to the east...
.