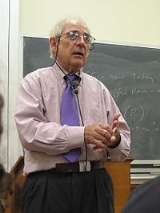 The ascription of an unconscious intentional phenomenon to a system implies that the phenomenon is in principle accessible to consciousness.

A statement of the author’s “connection principle.”

Where conscious subjectivity is concerned, there is no distinction between the observation and the thing observed.

In the performance of an illocutionary act in the literal utterance of a sentence, the speaker intends to produce a certain effect by means of getting the hearer to recognize his intention to produce that effect; and furthermore, if he is using the words literally, he intends this recognition to be achieved in virtue of the fact that the rules for using the expressions he utters associate the expression with the production of that effect.

Whatever is referred to must exist. Let us call this the axiom of existence.

The general nature of the speech act fallacy can be stated as follows, using “good” as our example. Calling something good is characteristically praising or commending or recommending it, etc. But it is a fallacy to infer from this that the meaning of “good” is explained by saying it is used to perform the act of commendation.

The assertion fallacy ... is the fallacy of confusing the conditions for the performance of the speech act of assertion with the analysis of the meaning of particular words occurring in certain assertions.

Well, what does “good” mean anyway...? As Wittgenstein suggested, “good,” like “game,” has a family of meanings. Prominent among them is this one: “meets the criteria or standards of assessment or evaluation.”

Where questions of style and exposition are concerned I try to follow a simple maxim: if you can’t say it clearly you don’t understand it yourself.

It seems to me obvious that infants and many animals that do not in any ordinary sense have a language or perform speech acts nonetheless have Intentional states. Only someone in the grip of a philosophical theory would deny that small babies can literally be said to want milk and that dogs want to be let out or believe that their master is at the door.