At first he worked as a newspaper reporter, but in 1913 he exhibited landscapes with his brother at the Dorien Leigh Galleries, London, and was invited to join The London Group and the Friday Club.

The artist's main business is to train his eye to see,then to probe and then to train his hand to work in sympathy with his eye.

I never look for more than reality,the farming,the trees,the river.I suppose poetry gets in to reality.

In looking at a landscape its abstract features appeal pretty quickly.Although representational I am primarily interested in the structure underneath,though I hope not obviously.

Encyclopedia
John Northcote Nash CBE
Order of the British Empire
The Most Excellent Order of the British Empire is an order of chivalry established on 4 June 1917 by George V of the United Kingdom. The Order comprises five classes in civil and military divisions...
RA (11 April 1893 – 23 September 1977) was a British painter of landscape and still-life, wood-engraver and illustrator, particularly of botanic works.

At first he worked as a newspaper reporter, but in 1913 he exhibited landscapes with his brother at the Dorien Leigh Galleries, London, and was invited to join The London Group and the Friday Club.

In 1914 he began painting in oils. In 1915 he joined Harold Gilman
Harold Gilman
The British artist Harold John Wilde Gilman was a painter of interiors, portraits and landscapes, and a founder-member of the Camden Town Group.-Early life and studies:...
in the Cumberland Market Group
Cumberland Market Group
The Cumberland Market Group was a short-lived artistic grouping in early twentieth century London. The group met in the studio of Robert Bevan in Cumberland Market, the old hay and straw market off Albany Street, and held one exhibition.-History:...
and in May that year exhibited with Gilman, Charles Ginner
Charles Ginner
Charles Isaac Ginner was a painter of landscape and urban subjects. Born in the south of France at Cannes, of British parents, in 1910 he settled in London, where he was an associate of Spencer Gore and Harold Gilman and a key member of the Camden Town Group.-Early years and studies:Charles Isaac...
and Robert Bevan
Robert Bevan
Robert Polhill Bevan was an English painter, draughtsman and lithographer. He was a founding member of the Camden Town Group, the London Group, and the Cumberland Market Group.-Early life:...
at the Goupil Gallery.

From 1918 to 1921 he lived at Gerrards Cross
Gerrards Cross
Gerrards Cross is a village in Buckinghamshire, England. It is in the south of the county, near the border with Greater London, south of Chalfont St Peter. Gerrards Cross is also a civil parish within South Bucks district, which was known as the Beaconsfield district from 1974 to 1980...
, with summer expeditions to the Chiltern Hills
Chiltern Hills
The Chiltern Hills form a chalk escarpment in South East England. They are known locally as "the Chilterns". A large portion of the hills was designated officially as an Area of Outstanding Natural Beauty in 1965.-Location:...
and Gloucestershire. In 1919 he became a member of the New English Art Club
New English Art Club
The New English Art Club was founded in London in 1885 as an alternate venue to the Royal Academy.-History:Young English artists returning from studying art in Paris mounted the first exhibition of the New English Art Club in April 1886...
, and in 1921 of the Society of Wood Engravers
Society of Wood Engravers
The Society of Wood Engravers was co-founded in 1920 by British wood engraving artist Gwendoline Raverat, wife of French painter Jacques Raverat.The Society was revived in 1984 by Hilary Paynter. It publishes a bulletin called Multiples....
. In 1921 he became art critic for The London Mercury.

In 1921 he moved to Princes Risborough.

He started World War II
World War II
World War II, or the Second World War , was a global conflict lasting from 1939 to 1945, involving most of the world's nations—including all of the great powers—eventually forming two opposing military alliances: the Allies and the Axis...
in 1939 in the Observer Corps, moving in 1940 to the Admiralty
Admiralty
The Admiralty was formerly the authority in the Kingdom of England, and later in the United Kingdom, responsible for the command of the Royal Navy...
as an official war artist with the rank of Captain
Captain (British Army and Royal Marines)
Captain is a junior officer rank of the British Army and Royal Marines. It ranks above Lieutenant and below Major and has a NATO ranking code of OF-2. The rank is equivalent to a Lieutenant in the Royal Navy and to a Flight Lieutenant in the Royal Air Force...
in the Royal Marines
Royal Marines
The Corps of Her Majesty's Royal Marines, commonly just referred to as the Royal Marines , are the marine corps and amphibious infantry of the United Kingdom and, along with the Royal Navy and Royal Fleet Auxiliary, form the Naval Service...
. He was promoted Acting Major
Major
Major is a rank of commissioned officer, with corresponding ranks existing in almost every military in the world.When used unhyphenated, in conjunction with no other indicator of rank, the term refers to the rank just senior to that of an Army captain and just below the rank of lieutenant colonel. ...
in 1943, and relinquished his commission in November 1944.

Afterwards he lived in Essex. He joined the staff of the Royal College of Art in 1945. 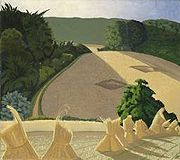 John Nash had no formal art training, but was encouraged by his brother to develop his abilities as a draughtsman. His early work was in watercolour and included Biblical scenes, comic drawings and landscapes. A joint exhibition with Paul at the Dorien Leigh Gallery, London, in 1913 was successful, and John was invited to become a founder-member of the London Group
London Group
The London Group is an artists' exhibiting society based in London, England, founded in 1913, when the Camden Town Group came together with the English Vorticists and other independent artists to challenge the domination of the Royal Academy, which had become unadventurous and conservative....
in 1914, and to join Robert Bevan's Cumberland Market Group
Cumberland Market Group
The Cumberland Market Group was a short-lived artistic grouping in early twentieth century London. The group met in the studio of Robert Bevan in Cumberland Market, the old hay and straw market off Albany Street, and held one exhibition.-History:...
in 1915. He was an important influence on the work of the artist Dora Carrington
Dora Carrington
Dora de Houghton Carrington , known generally as Carrington, was a British painter and decorative artist, remembered in part for her association with members of the Bloomsbury Group, especially the writer Lytton Strachey....
(with whom he was in love), and some of her works have been mistaken for his in the past.

In 1916 he married Carrington's friend Christine Kuhlenthal, who had studied at the Slade
Slade
Slade are an English rock band from Wolverhampton, who rose to prominence during the glam rock era of the early 1970s. With 17 consecutive Top 20 hits and six number ones, the British Hit Singles & Albums names them as the most successful British group of the 1970s based on sales of singles...
. moving to Meadle in Buckinghamshire

Nash began painting in oils with the encouragement of Harold Gilman
Harold Gilman
The British artist Harold John Wilde Gilman was a painter of interiors, portraits and landscapes, and a founder-member of the Camden Town Group.-Early life and studies:...
, whose meticulous craftsmanship influenced his finest landscapes such as The Cornfield (1918; London, Tate). The Cornfield was the first painting Nash completed that did not depict the theme of war. The picture with its ordered view of the landscape and geometric treatment of the corn stooks prefigures his brother Paul's Equivalents for the Megaliths. John said that he and Paul used to paint for their own pleasure only after six o'clock, when their work as war artists was over for the day. Hence the long shadows cast by the evening sun across the middle of the painting.

His most famous painting is Over the Top (oil on canvas, 79.4 x 107.3 cm), now hanging in the Imperial War Museum
Imperial War Museum
Imperial War Museum is a British national museum organisation with branches at five locations in England, three of which are in London. The museum was founded during the First World War in 1917 and intended as a record of the war effort and sacrifice of Britain and her Empire...
, London. It is an image of the attack during which the 1st Battalion Artists Rifles
Artists' Rifles
The Artists Rifles is a volunteer regiment of the British Army. Raised in London in 1859 as a volunteer light infantry unit, the regiment saw active service during the Boer Wars and World War I, earning a number of battle honours; however, it did not serve outside of Britain during World War II, as...
left their trenches
Trench warfare
Trench warfare is a form of occupied fighting lines, consisting largely of trenches, in which troops are largely immune to the enemy's small arms fire and are substantially sheltered from artillery...
and pushed towards Marcoing near Cambrai
Cambrai
Cambrai is a commune in the Nord department in northern France. It is a sub-prefecture of the department.Cambrai is the seat of an archdiocese whose jurisdiction was immense during the Middle Ages. The territory of the Bishopric of Cambrai, roughly coinciding with the shire of Brabant, included...
. Of the eighty men, sixty-eight were killed or wounded during the first few minutes. Nash was one of the twelve spared by the shell-fire, and painted this picture three months later.

After World War I, Nash's efforts went mainly into painting landscapes. Emotions, however, concerning the war continued to linger for many years; and this was depicted in his landscape painting. This is particularly evident in The Moat, Grange Farm, Kimble, oil on canvas, exhibited in 1922. In this brooding landscape the trees and their tendril-like branches envelope the entire picture plane.The dark subtle colours and evening light give the painting a claustrophobic atmosphere. This painting, completed a few years after the war, is characterised by a sense of bleak desolation that suggests the profound introspection that for many followed the devastation of the war. Although he had a great love of nature Nash often used natural subjects to convey powerful and sensitive thoughts concerning the human condition.
He was close friends with the writer Ronald Blythe
Ronald Blythe
Ronald Blythe is an English writer and editor, best known in his native England for his Akenfield: Portrait of an English Village , a portrait of agricultural life in Suffolk from the turn of the century to the 1960s...
, who dedicated his best-selling book Akenfield
Akenfield
Akenfield is a film made by Peter Hall in 1974, based loosely upon the book Akenfield: Portrait of an English Village by Ronald Blythe . It can claim a degree of cult status as a work of rural realism, unusual in relation to East Anglia...
to the artist.

In addition to his painting abilities John Nash was also an accomplished printmaker. He was a founder member of the Society of Wood Engravers
Society of Wood Engravers
The Society of Wood Engravers was co-founded in 1920 by British wood engraving artist Gwendoline Raverat, wife of French painter Jacques Raverat.The Society was revived in 1984 by Hilary Paynter. It publishes a bulletin called Multiples....
(1920). He produced woodcuts and wood engravings first as decorations to literary periodicals, and then increasingly as illustrations for books produced by the private presses; these include Jonathan Swift’s Directions to Servants (Golden Cockerel Press, 1925) and Edmund Spenser’s The Shepheard’s Calendar (Cresset Press, 1930). A particular interest in botanical subjects can be instanced in this period by his illustrations to Gathorne-Hardy’s Wild Flowers in Britain (Batsford 1938).