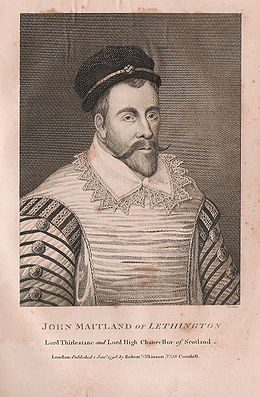 He was the second son of Sir Richard Maitland
Richard Maitland
Sir Richard Maitland of Lethington and Thirlstane was a Senator of the College of Justice, an Ordinary Lord of Session from 1561 until 1584, and notable Scottish poet. He was served heir to his father, Sir William Maitland of Lethington, Haddingtonshire, and Thirlestane, Berwickshire, on 15...
of Thirlestane, Berwickshire
Berwickshire
Berwickshire or the County of Berwick is a registration county, a committee area of the Scottish Borders Council, and a lieutenancy area of Scotland, on the border with England. The town after which it is named—Berwick-upon-Tweed—was lost by Scotland to England in 1482...
, and Lethington, Haddingtonshire, who settled the lands of Thirlestane upon him, and he was sent abroad for his education.

Upon John Maitland's return, through the influence of his brother, William Maitland, he received the offer of the position of Commendator of Kelso Abbey
Kelso Abbey
Kelso Abbey is what remains of a Scottish abbey founded in the 12th century by a community of Tironensian monks first brought to Scotland in the reign of Alexander I. It occupies ground overlooking the confluence of the Tweed and Teviot waters, the site of what was once the Royal Burgh of Roxburgh...
, which he shortly afterwards exchanged with Francis Stewart, later Earl of Bothwell, for the Priory of Coldingham
Coldingham
Coldingham is a historic village in Berwickshire, Scottish Borders, on Scotland's southeast coastline, north of Eyemouth.As early as AD 660, Coldingham was the site of a religious establishment of high order, when it is recorded that Etheldreda, the queen of Egfrid, became a nun at the Abbey of...
. This transaction was ratified by Mary, Queen of Scots on April 20, 1567.

Following the Regent Murray
James Stewart, 1st Earl of Moray
James Stewart, 1st Earl of Moray , a member of the House of Stewart as the illegitimate son of King James V, was Regent of Scotland for his nephew, the infant King James VI of Scotland, from 1567 until his assassination in 1570...
's assassination, Maitland joined the Lords who met on the Queen's behalf at Linlithgow
Linlithgow
Linlithgow is a Royal Burgh in West Lothian, Scotland. An ancient town, it lies south of its two most prominent landmarks: Linlithgow Palace and Linlithgow Loch, and north of the Union Canal....
, and shared in the dangers of the civil war which ensued. At the end of 1570 he was denounced a rebel by the King's party, with his brothers William and Thomas, and they were all forfeited in the parliament which met in the Canongate
Canongate
The Canongate is a small district at the heart of Edinburgh, the capital city of Scotland.The name derives from the main street running through the area: called Canongate without the definite article, "the". Canongate forms the lower, eastern half of the Royal Mile in Edinburgh's historic Old Town....
, the so-called 'cropped parliament'.

John Maitland was deprived of all his offices and benefices, and took refuge in Edinburgh Castle
Edinburgh Castle
Edinburgh Castle is a fortress which dominates the skyline of the city of Edinburgh, Scotland, from its position atop the volcanic Castle Rock. Human habitation of the site is dated back as far as the 9th century BC, although the nature of early settlement is unclear...
. Upon its surrender on the 29 May 1573 he was sent as a prisoner to Tantallon Castle
Tantallon Castle
Tantallon Castle is a mid-14th-century fortress, located east of North Berwick, in East Lothian, Scotland. It sits atop a promontory opposite the Bass Rock, looking out onto the Firth of Forth...
in Haddingtonshire. After nine months confinement there he was removed to Hugh, Lord Somerville's house of Cowthallie, under house-arrest with bail at £10,000 Scots. In 1574/5 a Letter of Rehabilitation in his favour, as "Commendator of Coldingham", passed the Great Seal
Great Seal of Scotland
The Great Seal of Scotland allows the monarch to authorise official documents without having to sign each document individually. Wax is melted in a metal mould or matrix and impressed into a wax figure that is attached by cord or ribbon to documents that the monarch wishes to make official...
.

He was also appointed Lord Chancellor of Scotland
Lord Chancellor of Scotland
The Lord Chancellor of Scotland was a Great Officer of State in pre-Union Scotland.Holders of the office are known from 1123 onwards, but its duties were occasionally performed by an official of lower status with the title of Keeper of the Great Seal...
in 1586, following Arran
James Stewart, Earl of Arran
Captain James Stewart, Earl of Arran was created Earl of Arran by the young King James VI, who wrested the title from James Hamilton, 3rd Earl of Arran...
's disgrace. In 1589 a powerful combination, headed by the Earls of Huntly, Errol, and Bothwell, &c., was formed against Maitland. It was intended to meet at Quarryholes, between Leith and Edinburgh, to march in a body to Holyroodhouse, make themselves master of the King's person, and put the Chancellor to death. The King and Maitland were not, however, at Holyroodhouse and the plot failed. Several other plots were formed against him shortly afterwards, but they were all defeated.

He was one of those who accompanied James VI on his matrimonial voyage to Denmark
Denmark
Denmark is a Scandinavian country in Northern Europe. The countries of Denmark and Greenland, as well as the Faroe Islands, constitute the Kingdom of Denmark . It is the southernmost of the Nordic countries, southwest of Sweden and south of Norway, and bordered to the south by Germany. Denmark...
and shortly after his return he was made a Lord of Parliament
Lord of Parliament
A Lord of Parliament was the lowest rank of nobility automatically entitled to attend sessions of the pre-Union Parliament of Scotland. Post-Union, it is a member of the lowest rank of the Peerage of Scotland, ranking below a viscount...
with the title Lord Maitland of Thirlestane, on May 18, 1590.

Sir John Scot of Scotstarvet, writing in the seventeenth century, had this to say of the 1st Lord Maitland:
"Mr John Maitland, second brother to Secretary Maitland, after he had studied the laws in France, was preferred to be a Lord of Session by the said Earl of Arran's means, and thereafter became Chancellor. He was one of the Octavians
Octavians
The Octavians were a financial commission of eight in the government of Scotland first appointed by James VI in January 1596. James's minister John Maitland, 1st Lord Maitland of Thirlestane had died a few months earlier, and his financial situation was troubled. They were a reforming body, eager...
(a name given to eight persons who managed affairs under king James VI), and was created Lord Thirlestane (sic), and was an excellent Latin poet, as his verses inserted in Deliciae poetarum scotorum testify; and King James had such a respect to him, that he made the epitaph engraven on his tomb. Yet the conquest he made of the barony of Liddington (Lethington) from his brother's son, James Maitland, was not thought lawful nor conscientious."

He was buried in St. Mary's, Haddington
Haddington, East Lothian
The Royal Burgh of Haddington is a town in East Lothian, Scotland. It is the main administrative, cultural and geographical centre for East Lothian, which was known officially as Haddingtonshire before 1921. It lies about east of Edinburgh. The name Haddington is Anglo-Saxon, dating from the 6th...
, where a splendid monument, with an epitaph, composed by King James VI, was erected to his memory. The Commendatorship of Coldingham was bestowed upon Francis Stewart, 1st Earl of Bothwell, eldest son of the late Prior, John Stewart.