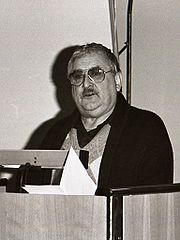 John Harryson was a Swedish
Sweden
Sweden , officially the Kingdom of Sweden , is a Nordic country on the Scandinavian Peninsula in Northern Europe. Sweden borders with Norway and Finland and is connected to Denmark by a bridge-tunnel across the Öresund....
actor
Actor
An actor is a person who acts in a dramatic production and who works in film, television, theatre, or radio in that capacity...
. He was the father of famous Swedish actor and television host Peter Harryson
Peter Harryson
John Peter Kaj Harryson is a Swedish actor, singer and entertainer from Norrköping, Östergötland. He is the son of actor John Harryson ....
.

For a younger generation John Harrysson was known as the Swedish voice of Uncle Scrooge
Uncle Scrooge
Uncle Scrooge is a comic book with the stingy Scrooge McDuck "the richest duck in the world" as the main character. The series also featured Donald Duck and his nephews as supporting characters. The first 70 issues mostly consisted of stories written and drawn by Carl Barks, the creator of Scrooge...
, Eeyore
Eeyore
Eeyore is a character in the Winnie-the-Pooh books by A. A. Milne. He is generally characterized as a pessimistic, gloomy, depressed, anhedonic, old grey stuffed donkey who is a friend of the title character, Winnie-the-Pooh....
in Winnie the Pooh, Doctor Snuggles
Doctor Snuggles
Doctor Snuggles is an animated television series created by Jeffrey O'Kelly about a friendly and optimistic inventor named Doctor Snuggles who has unusual adventures with his friends in a slightly psychedelic world...
, and the Sheriff of Nottingham
Sheriff of Nottingham
The Sheriff of Nottingham was historically the office responsible for enforcing law and order in Nottingham and bringing criminals to justice. For years the post has been directly appointed by the Lord Mayor of Nottingham and in modern times, with the existence of the police force, the position is...
in Robin Hood
Robin Hood (1973 film)
Robin Hood is an 1973 American animated film produced by the Walt Disney Productions, first released in the United States on November 8, 1973...
.