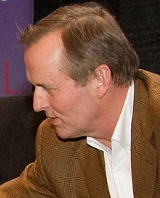 Overview
John Ray Grisham, Jr. is an American lawyer
Lawyer
A lawyer, according to Black's Law Dictionary, is "a person learned in the law; as an attorney, counsel or solicitor; a person who is practicing law." Law is the system of rules of conduct established by the sovereign government of a society to correct wrongs, maintain the stability of political...
and author, best known for his popular legal thriller
Legal thriller
The legal thriller is a sub-genre of thriller and crime fiction in which the major characters are lawyers and their employees. The system of justice itself is always a major part of these works, at times almost functioning as one of the characters...
s.

Who were the spruills family in a painted house
More
x